In March of 2017 I first introduced my OO gauge fixed link couplings for UK wagons, you can find the post here, and they developed into a range of couplings to suit both 3 Link and Instanter couplings.  They’ve been doing well but there have been a few issues so a revisit to the design is required.  In this post I’ll be showing you the first steps.

The couplings, as shown below, are designed to fit into NEM standard pockets and form a permanent link between two wagons whilst retaining the look of a 3 Link and Instanter coupling.

And I think they do this very well.

At the time, an important design feature was the ability to add some flexibility onto the coupling to allow it to navigate corners.  I considered the main part of the coupling too stiff and was worried it would pull trucks off the rails on corners.  A solution was achieved through a flexible section; this was covered in the second post which can be found here.  But it’s this flexible section which has caused the issues.  The material used for the couplings is Shapeways’ Smooth Fine Detail but, as you may have read in other posts, it is brittle and the couplings tend to break at the flexible section, especially when handling several wagons joined together off the rails.  They tend to break here as it’s the part of the coupling with the least material.  One thing I also noticed is that the direction of the print also had an effect on the strength.  The original couplings were printed loose and often standing up on end.  This meant each layer of 3D printed material had a small surface area to bond with the last.  Printing the couplings laid down significantly increased this area and therefore the strength.  Since I made the alteration to print the couplings as a group, see the third post here, they’ve all been printed laid down, but they could still benefit from more strength.

As it turns out the couplings do have some flexibility and the required amount of movement is not great so I’m going to try some 3D printed couplings without the flexible section to see how they do.  Below you can see the revised couplings on the right.

The taller couplings had a much larger flexible section and coincidently it was much stronger; it was the flat coupling which broke more than any others.  But I’m going to try them all.

I’m also going to do some experiments with some of the other materials.  Once I have samples in hand I’ll share the results with you.

For a few weeks I’ve been experimenting with different materials for small gears and in this week’s post I wanted to share with you one of the materials which doesn’t work.

For a while now I’ve been 3D printing replacement gears for a variety of locomotives in Shapeways’ Smooth Fine Detail material (formally known as FUD).  This material has the advantage of being very accurate to the 3D model size; the detail is crisp, which is ideal for small teeth, it’s hard so it wears well, and several gears can be 3D printed in close proximity to each other without actually touching. 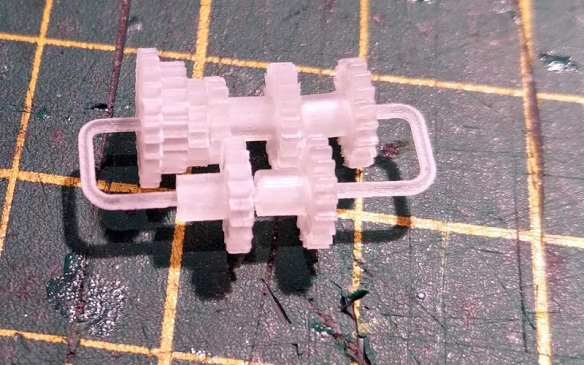 The disadvantage of this material is it hardens, which also makes it brittle.  For larger gears this isn’t a problem as the big surface area also adds strength, but with small and tiny gears the teeth tend to break under shock loads such as a locomotive suddenly stopping.  The tiny teeth have no flexibility and crack when overloaded.  The Smooth Fine Detail material is acrylic, or very close to it, and the properties don’t allow for flexibility.

Recently Shapeways’ introduced a new materiel, Multi Jet Fusion Plastic or PA12.  This is a product which comes from Hewlett-Packard and is a nylon plastic.  This sounds ideal for gears as it’s hard, but with a touch of flexibility, meaning the teeth can take a shock impact.  And it comes in dark grey which is nearly black.  Reading the design specifications for this material the level of detail attainable is not as high as the Smooth Fine Detail but I wanted to see how close it was.  So with a set of gears I’ve recently produced for the 009 Society I 3D printed them in both the Smooth Fine Detail and the PA12. 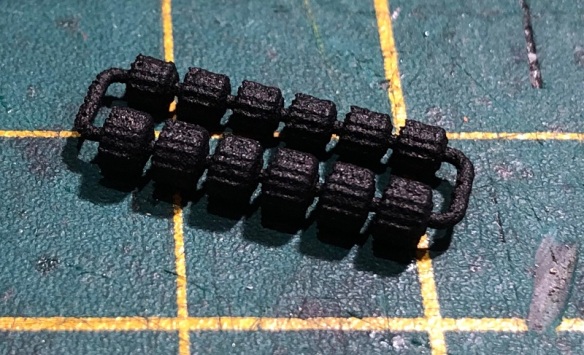 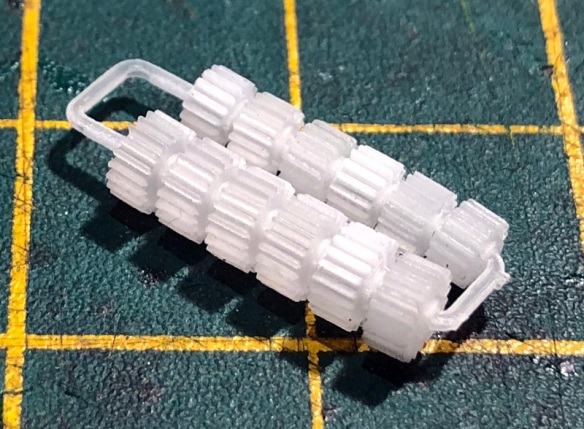 As you can see the PA12 simply doesn’t have the precision of the Smooth Fine Detail. The teeth have rounded as the material has flowed into itself and the gears are all fused to the spindle.  With the Smooth Fine Detail set the teeth are crisp, the same size as the 3D model, and all spin freely on the spindle.  To be fair these gears are particularly small at only 4.3mm in diameter for the larger and 3.4mm for the smaller.  The PA12 may work with some of my larger gears and I’ll give it a go with a later order.

But for now my primary material for gears is still the Smooth Fine Detail.

Sometimes trains get damaged, I’m sure it’s happened to most of us at some time.  And there’s always that one point on a model which is more prone to getting damaged than the rest.  On my C-855 shells it’s the lifters at the rear of the model.

The C-855 has four lifting points to allow the whole body to be lifted off the trucks.  There are two in the nose and two at the rear. The nose lifters can be seen below; there’s a recess behind the hole to allow a lifting shackle to be attached.

The rear lifters are raised up on posts.  This is to keep all four lifting points at the same height.  On the real locomotive the posts would have been thick heavy metal but in N Scale acrylic they’re a little thin.  And it’s these that are likely to break if the shell is dropped. 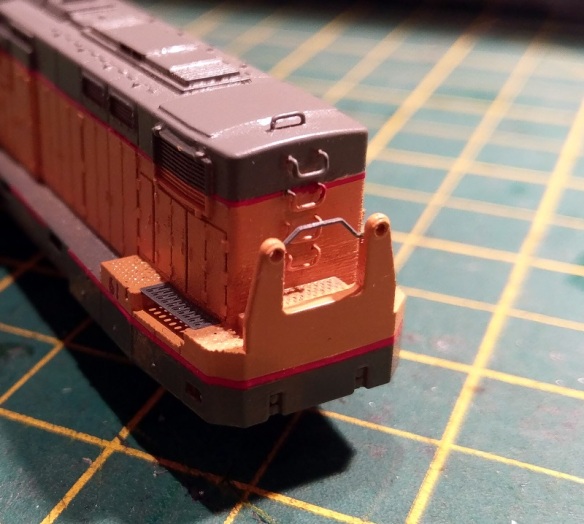 If you can find the broken part it’ll fix right back on with a drop of superglue as this material usually breaks with a clean edge.  Injection moulded parts tend to distort when they break so fixing them back on can be harder.

But if you can’t find the part a replacement is needed so I’ve created a set of four lifting posts as the C-855B has four posts because it has no nose. 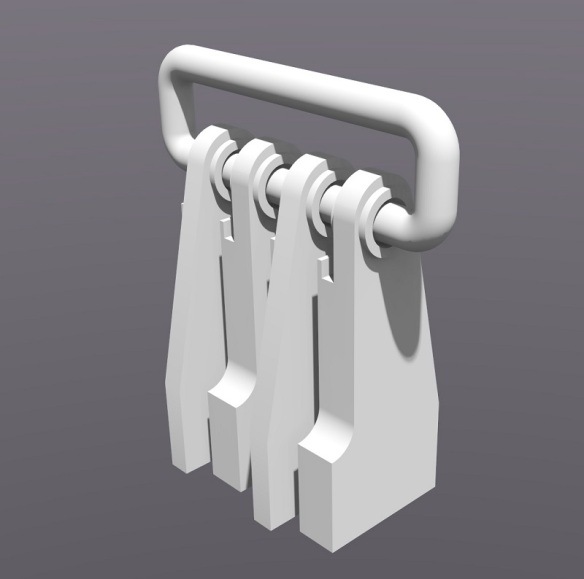 The set has two left and two right hand posts and they are all 3D printed on a ring which makes them a single part and therefore cheaper to print.  I’ve made them longer than normal so they can be shortened to the right length depending on where the break is.  As the material is hard these will not cut like injection model plastic but can easily be filed or sanded to get them to the right length.

The replacement C-855 lifters can be found here.