Back in March 2017 I was in the process of sharing with you my designs for OO Gauge fixed link couplings utilizing the NEM sockets; you can read the post here.  However when Shapeways announced their pricing structure change for the FUD and FXD materials this put a pause on the project.  Mainly because under the new pricing structure there is a $1 charge per part on top of the material costs etc.

The good news is I have now redesigned the couplings so they can be 3D printed as one piece but can be easily separated.  I looked at several different ways to do this but each had its pitfalls. Because all of the exposed parts of the couplings have high detail or are part of my flexible joint, putting a connection back to a sprue would mean a rough area would always be at the point where the coupling was cut off.  The other part of the coupling fits into the NEM socket so again any rough areas would prevent the coupling from fitting correctly.

The solution was to add all the couplings to a tie bar with ‘T’ stalks which pass through each coupling, without actually touching it, as shown below.

The ‘T’ head can easily be broken or cut off which lets the coupling fall away from the tie bar.

Although a tie bar could be used at each end of the coupling this proved to be unnecessary as you can see in this actual set of 3D printed couplings below. 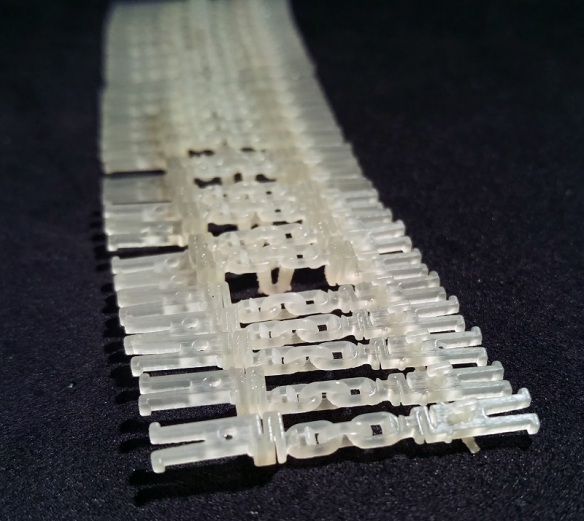 I’ve also made some other very small changes or improvements which don’t show up in pictures but should help to make them even better.  I plan to do a few last checks with these latest versions and then I’ll be making them available.

I plan to release them in packs of 4,10, 50 and 100.  There’ll also be a sample pack which will contain one of each so you can do some testing to see which type you need.  This will be affected by the different types and makes of rolling stock you have plus the radius of your curves; tighter curves will need the longer couplings to avoid buffer lock.

I am planning to have them ready for next week, so fingers crossed.