This kit is for an N Scale Alco C-855.  It is designed to fit over an N scale Con-Cor U50 or Turbine chassis which has been extended.

The typical kit contains the main body shell, fuel tank, sandboxes, two cab interiors, each with an engineer, a set of horns, drive shaft extenders and a fuel tank mounting plug.  The kit will also require two chassis extender parts or a dummy chassis. (note: the dummy chassis is not available yet).

Two cab interiors with engineers are supplied with every shell but fitting is optional. 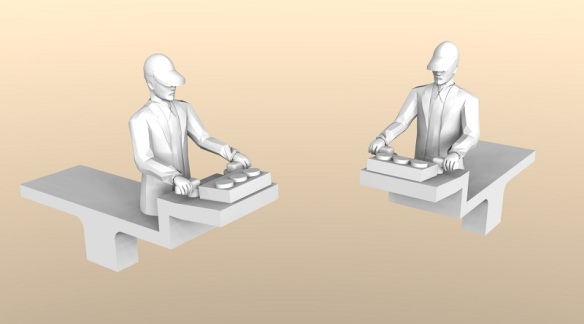 The detail part such as grab irons, handrails, sun visors, walkways, ladders, windscreen wipers and Air/MU hoses are available as brass Additions, as shown below.  These are available this locomotive here.

This locomotive kit is currently available in two version;

One C-855 shell and parts to be used with a ConCor U50/Turbine or dummy Chassis.

One C-855 Deluxe shell and parts to be used with a ConCor U50/Turbine or dummy Chassis.

The Deluxe version has had the orientation set to ensure the shell is printed the right way up, this gives a better quality finish.

A dummy locomotive chassis kit will be available soon.

Kits for extending a Con-Cor U50/Turbine chassis are available in three packs.

Set of one C-855 chassis extenders.

An instruction sheet for the shell parts will be available soon.

An instruction sheet for extending the chassis will be available soon.

Here is an example of a Con-Cor C-855 chassis which has been extended.

Kits printed in the Shapeways Fine Detail Plastics and will require cleaning upon delivery, please see my FAQs for more information.

All three companies produced big locomotives for UP to trial that shared two main principles; they were all twin-engine units riding on a single chassis and they all had eight powered axles.

EMD’s offering  was the DD35, pre runner to the DD35A & DD40AX.  The DD35 was effectively two GP35 bodies joined together riding on a pair of four axle trucks. It had no cab and was used as a booster unit.  EMD’s demonstrator set consisted of two 2500 horsepower GP35 locomotives and two 5000 horsepower  DD35 boosters. Together they gave the 15000 horsepower UP were looking for.  This is a model I have already produced for N Scale and you can find it here.

GE’s offering was the U50, as shown below paired with a EMD DD35.  This locomotive was built up from a pair of U25B locomotives on a singe chassis.  The chassis and trucks for the U50 came from retired 4500 Gas Turbines that the UP had traded back to GE.  So, as with the 4500 Gas Turbines, the U50 rode on four two axle trucks grouped in pairs and connected by span bolsters.  Unlike the DD35 these had cabs and could be used as single 5000 horsepower locomotives or in a set of three to meet UP’s requirement.  The U50 below is a production model made by Con-Cor.

Alco’s answer to UPs request was the C-855.  The C stands for Century and this locomotive was part of their Century series of locomotive that covered everything from small switching locomotives to these massive road engines.  The 855 refers to the numbered powered axles, eight in this case, and the horsepower.  The pair of sixteen cylinder Alco 251C diesel engines put out 5500 horsepower and in 1964 this made the C-855 the most powerful locomotive for its time.

Here is a link to a picture of UP number 61 taken by Chris Zygmunt in 1967 somewhere in Wyoming.  (Picture courtesy of www.railpictures.net)

As with the U50 UP traded in retired 4500 Gas turbines but Alco only used the trucks for their new locomotive, the chassis was a totally new design.  Alco built three locomotive as their demonstrator set consisting of a pair of A units with cabs and one cabless B unit.  Together the set produced a formidable 16500 horsepower and had potential for being the dominant locomotive.  But sadly due to poor performance UP did not order any more.  The original set of three stayed in general service based out of North Platte, Nebraska for nine years before being scrapped in February 1972.

Here is another link to a photo showing the set of three from Rick C’s collection.(Picture courtesy of http://www.rrpicturearchives.net) 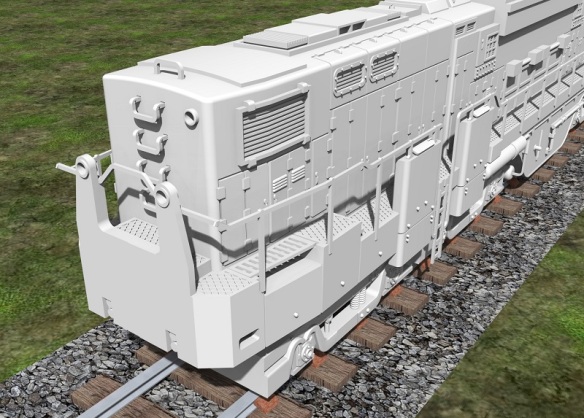