Over the last few months I’ve been busy working on customer layouts as well as getting my own layout ready for the Warley National 2019 Exhibition, which is in less than two weeks.  So I haven’t had a lot of time to work on the 3D printed projects, but that will pick up after the show.

You may recall, back in March, the Tehacipi Loop modules were fully working but rather bare. 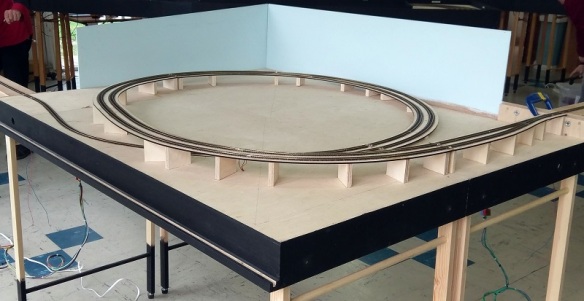 Well, about a month or so ago it looked like this.  I admit I was starting to panic!

The base construction is a mixture of cardboard and blue foam offcuts packed with newspaper.

The newspaper worked very well in giving an uneven natural shape for the plaster cloth to follow but the downside is it absorbs all the moisture from the cloth, and in a cold workshop, stays wet. 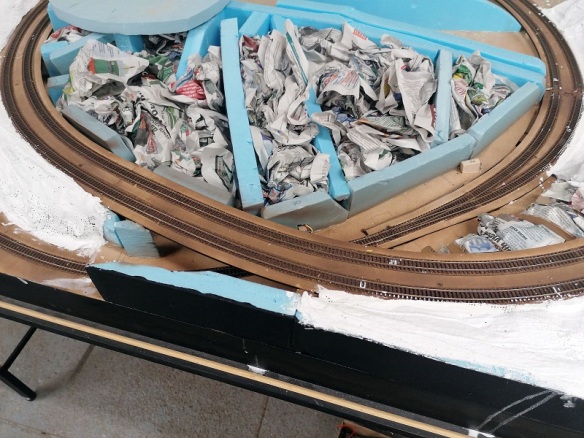 I had to place the only available heater, an oil radiator, under the modules to help the plaster cloth to set.  I also found that using hot water to dip the plaster cloth into also helped it set quicker.  Well, it seemed to and working in the cold, my hands appreciated it!

Once the cloth had hardened sufficiently, which took a day or so, I separated the two modules and pulled out the newspaper, which was still damp.  The cloth then dried completely.

You can also see from the images above I’ve sprayed the track with a grimy color.  As I passed the spray can over the track I followed round with a cloth and wiped the tops of the rails.  The rails will need a really good clean once all the scenery is done but this helps a lot.

The next step was to add some ground color.  This is important as without it the white of the cloth will always find ways to show through. Just over a week ago the loop module looked like this. 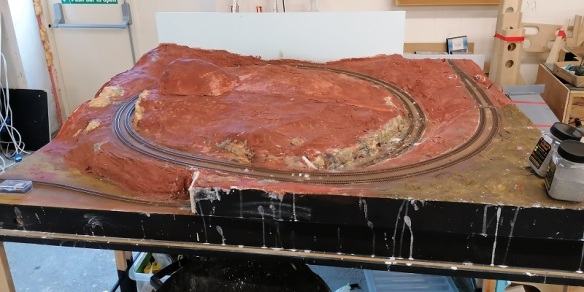 I use either a green or brown undercoat which is just a cheap acrylic paint thinned with water.

Once dried the track was ballasted; you can see my pots of ballast ready to go on the corner of the module.  The rock outcrops have also been positioned, and colored, in the same way I did the trestle module, which you can read about here.

Over the last weekend this module, and the incline boards which go with it, have been totally transformed and now have all their scenery finished.  But I don’t have photos yet, you will have to wait until next Monday for that, as they were still drying when I left them.

The Warley National 2019 Exhibition is on the 22nd and 23rd of November 2019 at the NEC in Birmingham, UK.  You can read more about the show here.  We’ll be at stand number B53, almost in the middle of the hall! Along with my loop there’ll be 6 other new modules added to our layout, so plenty of new works to see. 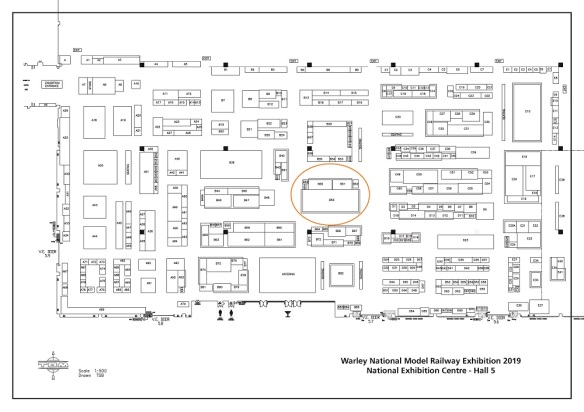 And if you think the exhibition doesn’t look big, remember that our layout at stall B53 is 65′ by 26′.

Next week I’ll bring you some photos of the modules in their finished state. If you’re coming to Warley you’ll be able to see them in action, but I’ll endeavor to get some good video of trains tackling the loop to post here as well.