As promised this week I have some photos of my new Tehachapi Loop modules for our club layout ‘Solent Summit’.  As with all model railways, it’s not finished, but it runs and it’s just about ready for the exhibition coming up this weekend.

The main section is the loop itself, built on two 5′ by 2′ modular boards, which takes the line up by 2 and a half inches.  You can see the basic boards in an earlier post here.

Starting at the top and right-hand end, the line enters the module, and splits into two lines to form a passing place.  The signal is a Showcase Miniatures kit and does work, just not yet.  Also, the track joint to the next board is offset because the modules are not currently joined together and I didn’t spot that when taking the photo! 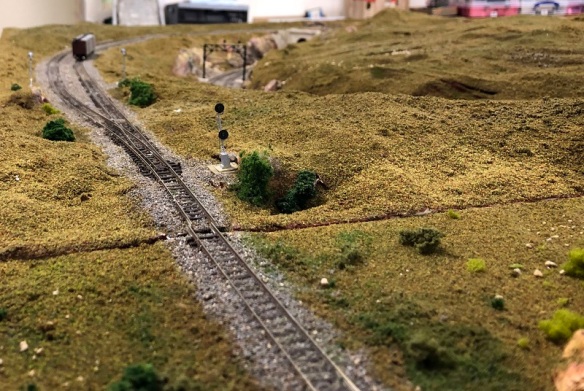 There are also two single signals for trains departing the loop. 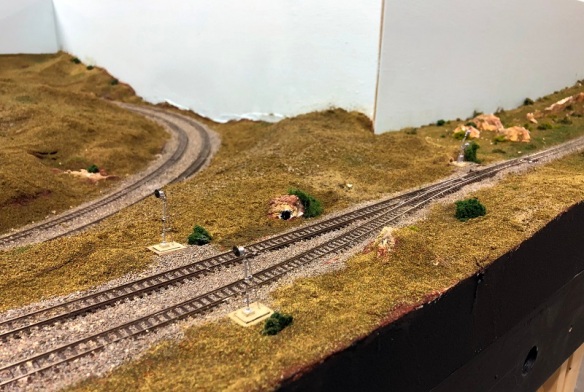 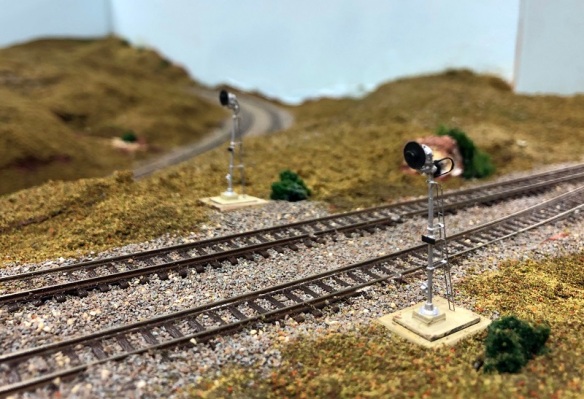 The twin lines then run around the module and the descent starts just after they cross the tunnel. 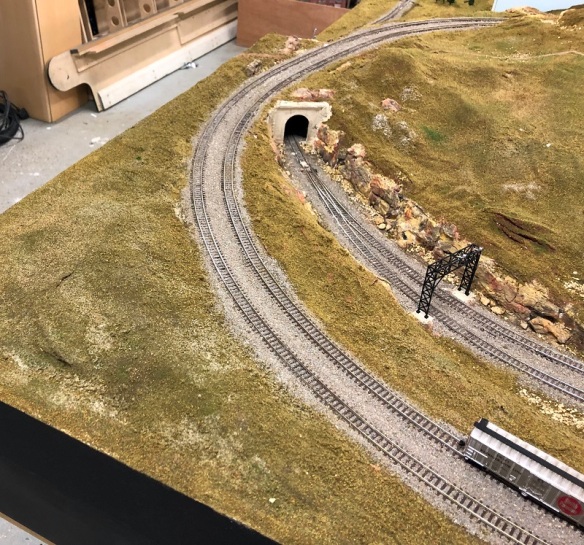 The real loop is a lot larger and has some country roads and tracks leading into the center, but as this is compressed to make it modular, I’ve compromised with a path leading up to the cross on the hill. 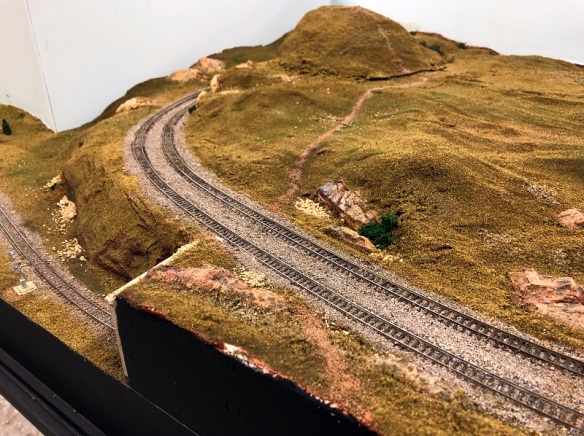 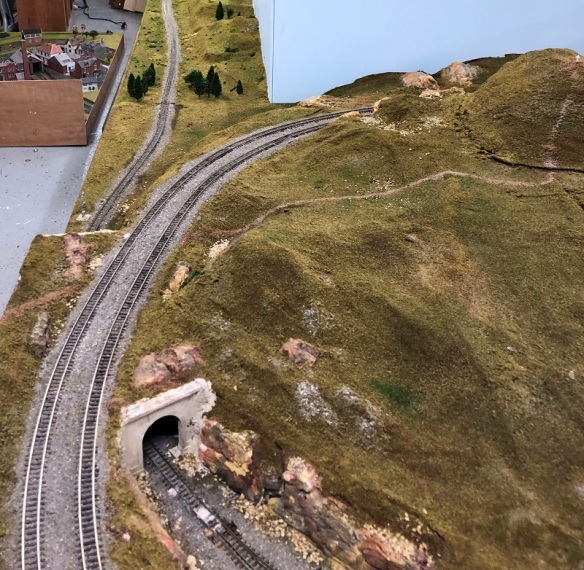 The cross, at the real Tehachapi Loop, is a memorial to the men who died working the landscape to build the railroad. 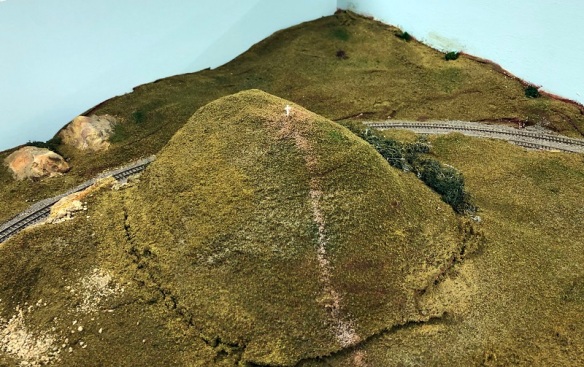 The lines run around the hill through a rock cutting, which also helps disguise the module joints. 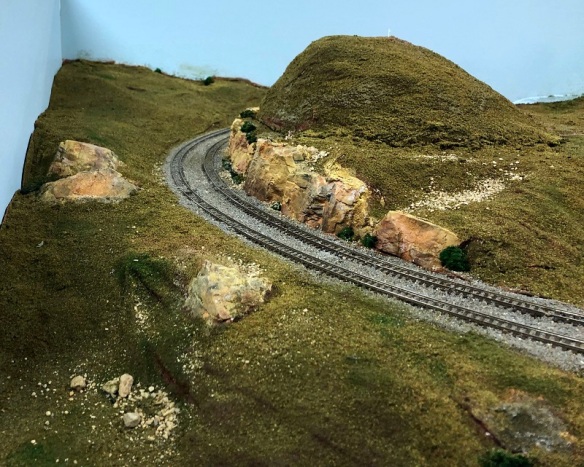 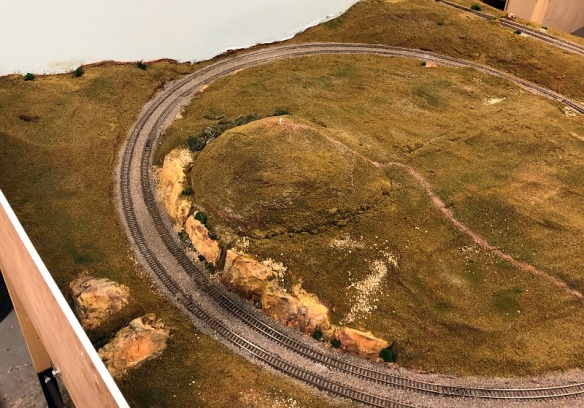 The lines continue to descend as they run around the back of the module. 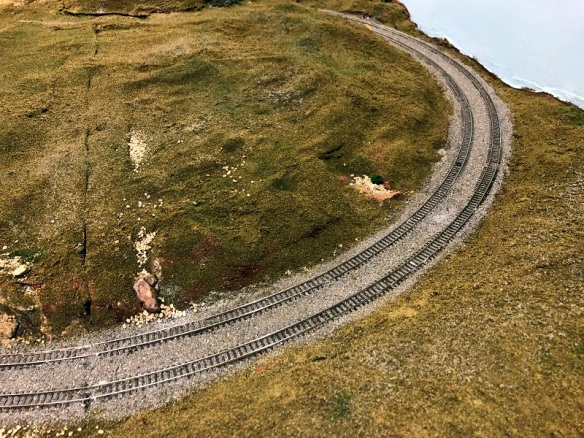 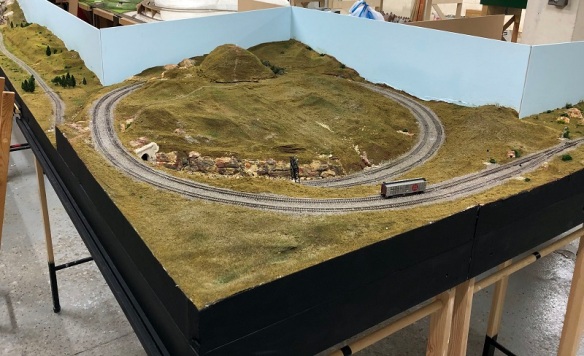 In the view below you can see the lines drop from one side to the other.  The gradient is a steady 2.25% on the inner line and 2.1% on the outer.

Just before the lines converge into one, there are two more signals for the exiting trains, but as the lines are now in a cutting and on a bend, these signals are mounted on a gantry so they can be seen by the locomotive engineers from a distance. 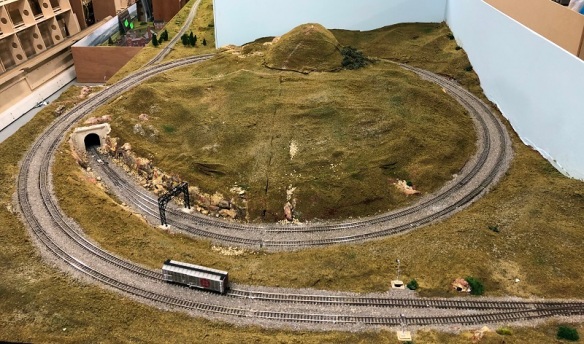 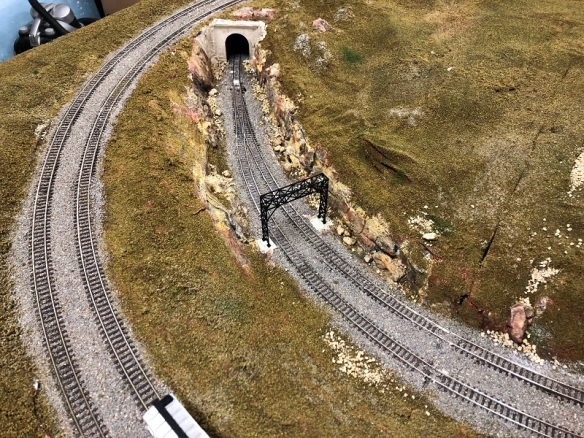 The gantry is 3D printed; it’s a model by fellow Shapeways designer Ngineer and can be found here. 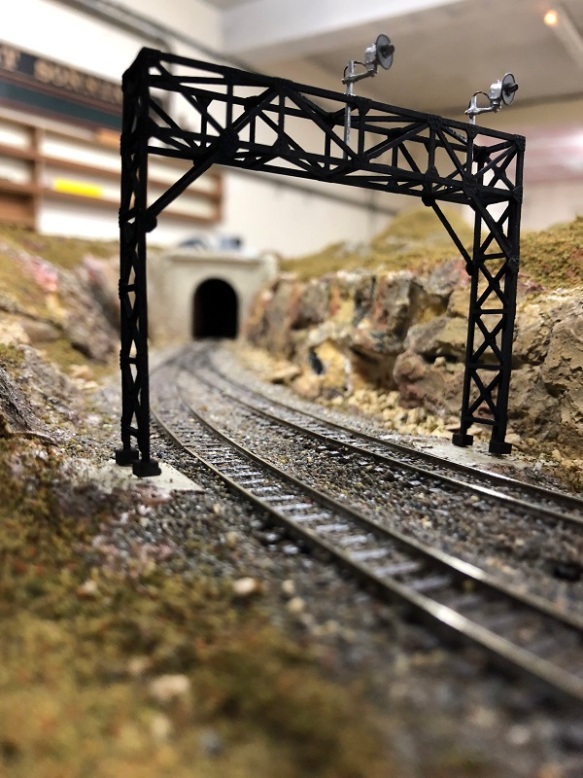 The signal heads are angled towards the back of the loop. 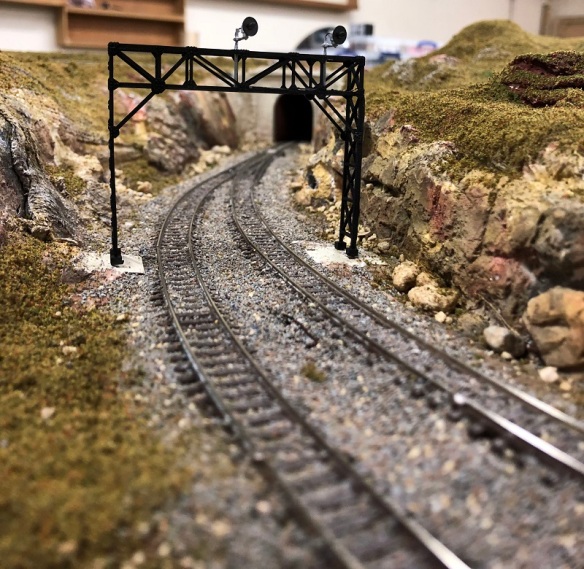 The shot below shows how the gantry signals are visible from around the bend. 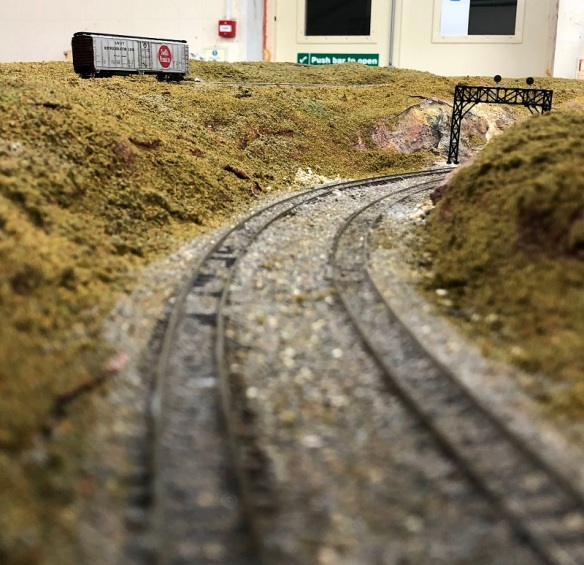 The line then stops descending and enters the tunnel. From here the line remains flat as it leaves the module. 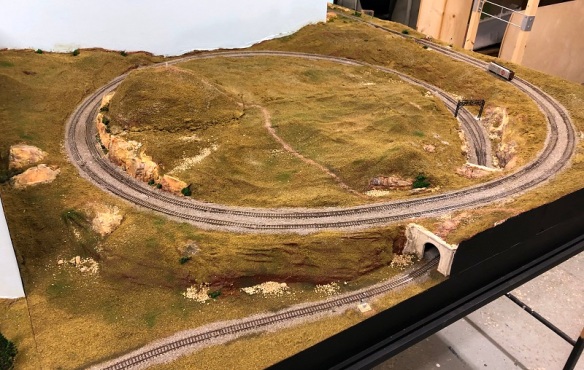 On the real Tehachapi Loop, the signal for the passing line is on the same side of the tunnel as the gantry, and the locomotive engineers can see it through the tunnel.  But as I’ve compressed the loop, and curved the line through the tunnel, I decided to put the signal on the other side. Anybody watching the layout will be able to see it once I have the signals working. 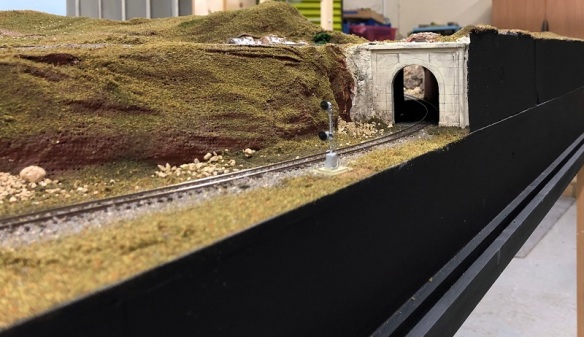 So there we have a version of the Tehachapi Loop on a modular N Scale layout. 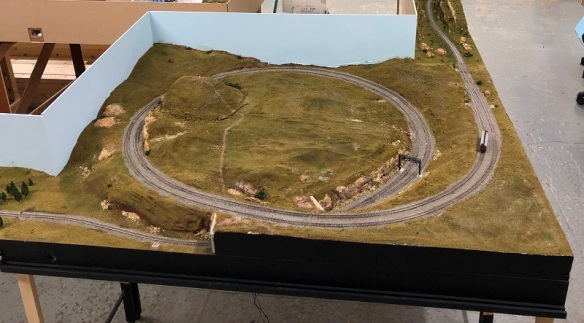 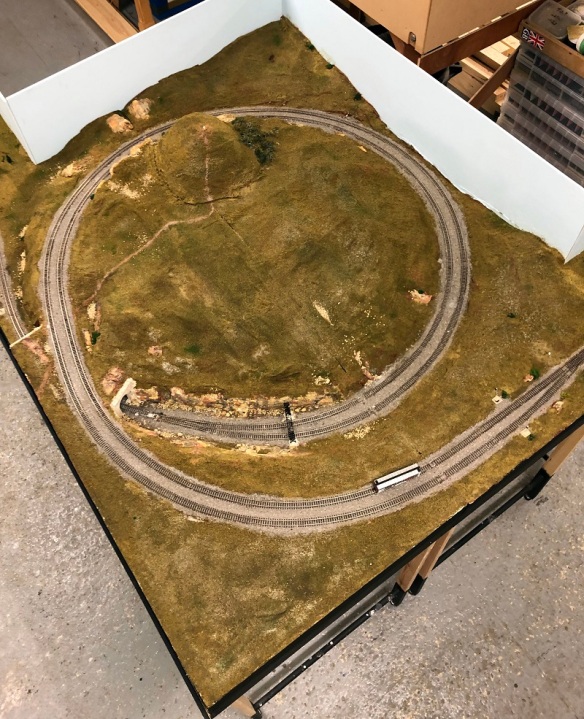 I must admit as much as I like the module I’m not as happy with it as I had hoped for two reasons:

Firstly, I feel I’ve rushed it and I think the ballasting, rock work and scenery reflect this.  But the great thing about scenery, it can be built upon to refine and improve the level of detail. So once the next show is over I can take a bit of time to work on this.

Secondly is the hill in the middle.  The slope of the land formation from the top of the hill to the cutting by the gantry signal was supposed to be more gradual, but I realized I had no more room between modules when they were packed together for transport. One sits upside down on top of the other and the land at the center of the loop almost touches.  So the hill is designed to lift off which causes, I think, an unsightly joint.   But I think I can conceal this with some more careful scenery work to disguise the joint.  Again, the great thing about model railway scenery is it’s never final and can always be changed. I look forward to getting some inspiration and maybe some advice on how to solve this problem at the show next weekend.

But with these two points said, it runs well and I think the trains look fantastic on it.  And once the signals are all working I’ll be very happy.

It’s now only four days until these are set up with thirty-five other modules, not including the non-scenic yards, to form the ‘Solent Summit Railroad’ at the Warley National 2019 Exhibition.  If you’re coming this weekend I will see you there and if you can’t make it I will get lots of photos and videos of the layout to share with you, including a full walk-around video as I did at the NMRA (BR) Annual Convention in 2015 below, which was only 21 modules.

As it’s such a big layout and we have to pack up and drive back on Sunday night I don’t think I’ll have a post next Monday, but it will give me more time to write a  more in-depth post for the week after.