This week I have a new product to share with you.  The N Gauge Dapol 4-6-2 Britannia is a great model.  But in a similar way to the N Scale Roundhouse, now Athearn’s, 2-6-0 and 2-8-0 steam engines, and the Atlas N Scale 4-4-0, this particular model also needed a new driveshaft and yoke.

The motor, and DCC decoder, is packed into the tender and a drive shaft runs through the cab to power the main driving wheels.  The motor axle has a yoke fitted to the end, as does the spindle in the cab.  A driveshaft connects the two yokes and allows the tender and locomotive to twist without breaking the transmission of power, just like a drive shaft does on a car without being affected by the car’s suspension or steering.

I modeled the three parts after taking measurements from the originals.  I made the driveshaft slightly longer as I’ve often had originals come apart when handling the locomotive. The set on the left are loose, but in order to avoid an individual part print charge, I’ve combined them into the set on the right.  None of the parts actually touch the sprew which can simply be cut away.

The parts were printed in Shapeways Smooth Fine Detail Plastic, as it’s the most accurate for small parts, and they came out very well.

On the model, it was the yoke on the motor axle which was missing.  This is normally due to the original splitting.  If the valve gear on the locomotive jams and the motor carries on trying to spin, the force can cause this to happen.

The new yoke, with a little bit of pressure, fitted onto the axle.  I’ve designed the hole in the yoke to be very slightly smaller than the axle so the pressure fit will prevent it from spinning on the axle.  Whenever fitting anything like this it’s important to make sure the inside of the yoke is clean and free from any 3D print residue, as this may cause an even tighter fit and could lead to the new yoke cracking as well.

As the old yoke on the locomotive spindle was intact I didn’t change it, but as you can see the new driveshaft fits well.

With the locomotive reassembled I also tried it with the original driveshaft; you can just make out the black spokes in the new tender yoke.

But I did find, as with the original setup, the driveshaft came out too easily.  The new 3D printed one is almost 0.8mm longer than the original and this helped keep it in place as you can see below.  Another alternative would be to slide the tender yoke slightly closer to the locomotive. 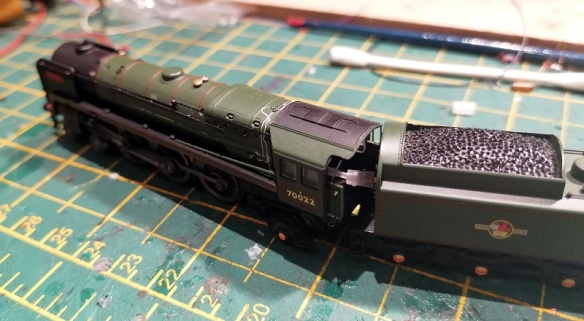 The last step was to test the new driveshaft and as you can see below I’ve lifted the locomotive driving wheels off the track for the first test.  I wanted to run the loco at speed for a while, and as the rear set of drivers have traction tires which are susceptible to coming off, I didn’t want to give them the chance.

The next test was to do several successful trips around the layout with twelve coaches behind, which it did with ease.

This coming weekend is the NMRA(BR) Benson winter meet and I’ll be there with my fellow club members and parts of our ‘Solent Summit’ layout.  As this is only a one-day event we won’t be putting on a 5 Mile show like we did at Warley!

The event is at the Benson Village Hall, Sunnyside, Benson, Oxfordshire OX10 6LZ from 10am till 4pm. I hope to see you there if you can make it, if not I hope to get some photos to share with you next week.