In last week’s post I told you about Rotary Snow Plows and my intention to make a model of UP 900081, the largest and most powerful rotary in the US.  You can find the post here.  In this week’s post I’ll go into a bit more detail about what I’m going to do.

UP 900081, as pictured below, is currently on display at the Museum of Transportation, St. Louis, Missouri, which is really useful as there are now lots of pictures available as reference material. 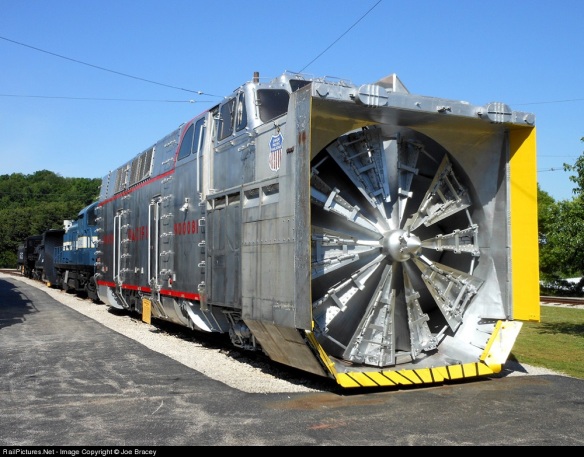 For my model the main body will be 3D printed in Shapeways FUD or FXD materials simply because to date this produces the best results.  And I’ll be setting the print orientation so the model is printed the right way up. (To see why this is important see my post about 3D print orientation here).

A lot of the surface area on the sides is flat so to help keep it smooth I’ll be making all the grab irons and ladders from etched brass. This has two advantages; firstly, anything sticking out of the side of the print needs support material underneath it in the print process and this can leave a shadow on the surface, and secondly, the etched parts look better. This has worked well on my other locomotives such as my Alco C855 as shown below. 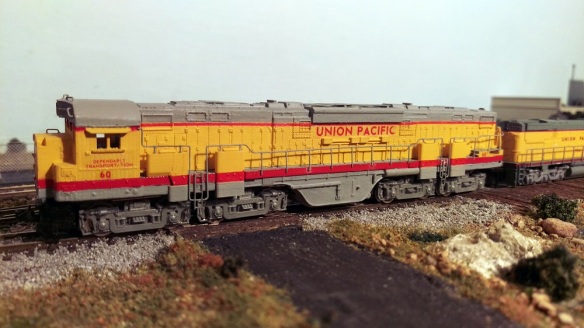 This time I’m also going to include the mesh grills as an etched brass part.  The mesh frame will be 3D printed as part of the shell and a fine mesh will fit in behind.  This will allow you to see inside slightly as with the original.

Other details will also be made from etched brass such as the side window wipers and the unusual rotating windows on the front.  These special windows, shown in the photo below, rotated continuously preventing snow from settling and obstructing the windows.  (Photo of UP 900082 taken at Cheyenne 14th June 2000 by Don Strack),

In this close up on Don’s photo you can clearly see the rotating windows. My 3D printed shell will have a lip behind the window to receive a piece of clear plastic to form the glass and the etched rotating window will sit on top.

The big twelve-foot fan at the front will also be 3D printed but as a separate part as I want this to be able to rotate.  In fact in my model it will be powered. I will have more on how that will be done next week.

Above the fan is the directional chute which will also be a separate part so it can be flipped from left to right.

The trucks on the rotary are not standard either, well, the second one is as it’s recycled truck from a C&O steam tender, but I think the front truck was constructed from parts, making it unique to the rotary.

These will also be 3D printed but they will only be side frames as they will fit onto the chassis which will be a bought in.  Why not 3D print one?  Because I want good reliable power pickup and a motor to drive the fan.  The easiest way to do that is to use a powered chassis that works well.  I will also make a 3D printed chassis and trucks for anybody wants an unpowered version.

Behind the front truck is a snow plow which can be lowered to prevent snow building up under the fuel tank, but this is N Scale so that will be a 3D printed part of the shell.  It will also depend on how the new chassis fits in at that point.

In next week’s post I’ll share with you which chassis I’ll be using and how it will be connected up to the fan (if it arrives in the post in time).  For now I’ll leave you with a quick render of how my 3D model looks so far.