My apologies for missing a post last week; I was travelling around Northern France on my motorbike, and I had a spectacular time, so hopefully you’ll understand!

Getting back to trains; this week I have some images to share with you from a 3D print which just arrived from Shapeways.  This model has been printed many times in the materials Frosted Ultra Detail and Frosted Extreme Detail, but what makes this different from the previous prints is using one of Shapeways’ new tools: I was able to specify the orientation of the print.

Why is orientation important?  With FUD and FXD 3D printing, the print material sits on a support material, which is a form of corn oil.  This support material, despite being very fine, leaves a slight imprint on the surfaces it touches, whereas the top of the 3D print is normally smooth.  Therefore we ideally want the surface with all the detail to be at the top.  However, the support material is fairly expensive, not as much as the print material, but lots of it can soon add up.  So Shapeways have previously positioned 3D printed models to minimize the amount of support material needed.  This means models like locomotive shells, which are basically bath tub shape, would get printed upside down to avoid the whole inside being filled with support material.  The models, as many of you know, still come out very well, as you can see in the images below.  This particular DT6-6-2000 shell was printed upside down in FUD.

The detail’s good but there’s still a level of fuzziness on the surface. 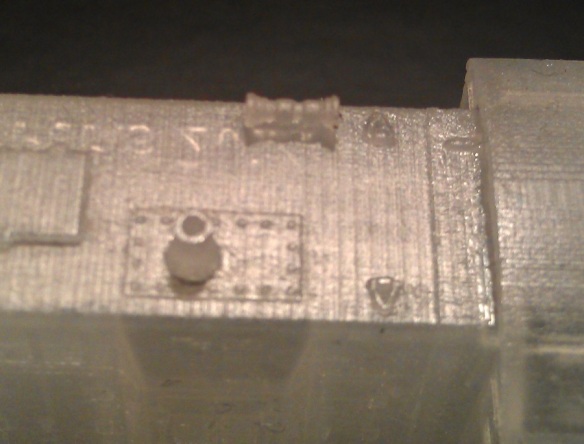 The inside of the shell is nice and smooth.

As you may have read in some of my previous posts Shapeways have reduced the cost of the FUD and FXD materials almost by half and added a charge for the support material used; so I can keep the orientation as it was and have a slightly cheaper model. But here’s where the choice of orientation is really good news. Now that they’ve added a tool which allows me to specify which way I want the model to be printed  I can guarantee all the crisp detail is on top and pay a bit more for the extra support material.

And that’s what I’ve done.

This DT6-6-2000 shell has also been 3D printed in the FUD material, which is not such a fine material as the FXD, but I think this is the best DT6-6-2000 shell I’ve received so far.  All the details are crisp and the top surfaces are smooth.  The images above were taken the day the shell was delivered before cleaning it.

The shell still had a waxy feel, which is normal as the corn oil leaves a residue.  To remove this I always soak my models in Goo Gone for 24 hours.  Many others use Bestine in the US but I’ve found Goo Gone works well for me.  The images below show the model after it’s come out of the Goo Gone, been rinsed under the tap and left to dry overnight.  Before I put any paint on it will need a bit longer to dry and I’ll give it a dust-off with a soft brush in a Dremel tool.  This is because any remaining corn oil residue will turn to powder as the model dries.  But as you can see the detail is very crisp.

And all the main surfaces are smooth.

So from now on I’ll be setting all my new models with the ‘Orientation Tool’ so the best detail gets the best print.  I’ll also be working through my existing models and making the change, but if the price difference is large I may offer the model with and without this option.  If you are about to order a 3D print and would like to know if the tool has been used, or what the price would be if it has not, please send me an email or get in touch via the contact page.

The quality of the 3D printed models we’ve been ordering from Shapeways has always been good, but this new tool takes the standard up and as modelers, we all like to get the best out of our hobby, so I hope you’re as excited as I am about this great new development!