In this week’s post I will be sharing with you some photos and videos of real trains taken at the Dean Forest Railway while they where having a steam gala.

The Dean Forest Railway, situated in the Forest of Dean, currently runs from Lydney Junction to Parkend, along the old Severn & Wye Railway route.  The line is 4 1/4 miles long and snakes its way up hill into the forest.

A third of the way along the line are the main locomotive sheds at Norchard.  This is also the center of the railway with all the shops, museum, facilities and parking. Interestingly the main Norchard station is considerably lower than the line to Parkend giving the railway a junction at Middle Forge.  This makes for some interesting train movements throughout the running day.  Lydney Town and Whitecroft are the other two stations along the line where passengers can alight or catch a train.

Normally the railway operates a single steam train or diesel rail car service up and down the line, but this weekend was special.  The DFR has teamed up with the Flour Mill who are professional steam locomotive re-builders.  They have the expertise and facilities to completely rebuild any steam railway locomotive and are located just a few miles into the forest at Bream. Over the last few years they have been restoring several locomotives for different railways but for this Gala, three have come back to turn their wheels on the DFR.

Four steam engines where running on the day I visited, one of which was the DFRs resident GWR 2-6-2T prairie, No. 5541.

The first of the visitors, and also the smallest, was No 30587, the Beattie Well Tank from the Bodmin & Wenford Railway.

This 2-4-0T is a very compact locomotive. It was designed by W. G. Beattie and built for the London & South Western Railway by Beyer Peacock in 1874.

You can see in the photo below, the driver has his feet up on the wheel arches which protrude into the cab space.

The bunker behind the cab is only for coal with the water being stored in two well tanks between the wheels, one under the bunker and cab and the other under the smoke box.  Both are linked with a balance pipe.

But don’t let it size fool you, this engine pulled very well and sounded fantastic working up the line.

Here is a video of the BT tank arriving at Lydney Junction taken from the signal box; having friends in the Signal and Telegraph department has its advantages.

The BT tank ran around it’s freight train to get ready for its next trip to Norchard.

The Lydney Junction station has two platforms and two separate run round loops.  At the south end it also has a connection to the main line allowing specials to run up into the forest.

The Signal box, as pictured below, controls the whole station and the road crossing.

The leaver frame inside operates all the points, point locks, signals and pedestrian crossing gates allowing access to the island platform.

The line operates on a token system and the box to the right of the leaver frame, also shown below, is the token machine.  A train can only run up the line to the next signal box if it is in possession of a token.  And a token can only be removed from the machine with the permission of the signalman in the next box.

In the previous video of the BT tank arriving at Lydney Junction you could see the fireman handing the token over to the signalman as the train cleared the section.  Once that token was reinserted into the token machine the line becomes free again.  When the signalman is ready to send a train up the line he pushes the large black button on the top right of the machine.  That rings a bell in the next signal box, if they are ready to receive a train they will respond which will allow a token to be removed locking the section to whichever train holds the token.

Later in the day the BT tank headed to Norchard from Lydney Junction East Platform, you can see signal man waiting next to the track with the section token for the train.

Being a freight train, the BT tank didn’t stop at Lydney Town and I was able to catch it trundling through.

The BT tank came into the Norchard Low level platform, which is a terminus, so again it needed to run around its train.  Although it was masquerading as a freight train it was actually giving brakevan rides; hence the need to go into the station.  The Norchard Signal box is situated at the end of the platform.  This box controls both the high and low lines.

The second visiting engine was Metropolitan No 1, or Met 1.

This 0-4-4 Tank engine was built in 1898 for the Metropolitan Railway of London.  It now belongs to the Quainton Railway Society at the Buckinghamshire Railway Centre. 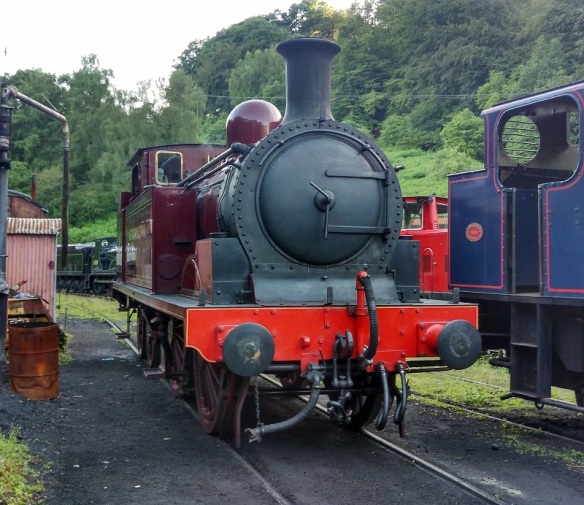 This engine was one of the original underground locomotives, that’s right I said underground!  And if you don’t believe me, here is a video made by Geofftech showing it running on the London underground back in 2013 as part of the 150 year celebration.

Heading back to the DFR, the Met 1 was puling a pair of coaches and a box van and I was able to catch it at Norchard High Level platform heading to Parkend.

It returned about 40 minuets later where I joined the train.

I think the train was running about 5 minuets late so the driver was keen to make this up, leaving Norchard High level he wasn’t sparing the horses. 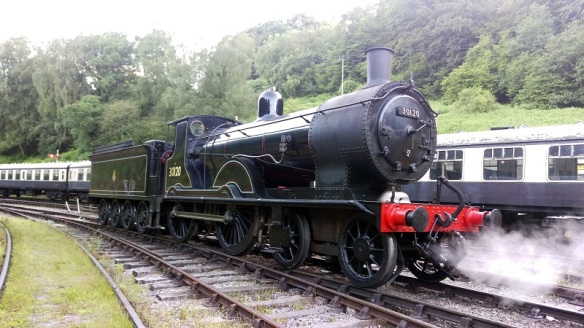 With its sleek lines and eight wheel tender its understandable why this class was called the greyhound.

The T9 is part of the National Railway Collection.

Again I was in the box at Lydney Junction when the T9 arrived.

The T9 did a quick turn around before heading back to Parkend.

The nice thing about Lydney Junction having two run around loops is two trains can run around at the same time and I was able to catch Met 1 and T9 doing just that later in the day.

The T9 was again the first to leave for Parkend.

I found it again coming into Lydney Town.

The next train through was the Met 1 and I took it all the way to Parkend, in the video clip below the train stops at the outer home signal before Norchard High Level and has to work hard to pull up the hill, it also sounds nice pulling out of the station.

Parkend is beautiful forest town and is currently the end of the line.  The original line carried on to Cinderford via Speech House road and the railway is in the process of planning to extend up to Speech House; which will add a few more miles to line as well as some lovely forest scenery past Cannop Ponds.

Arriving in Parkend the Met 1 found the T9 already run round and ready to go to Lydney. 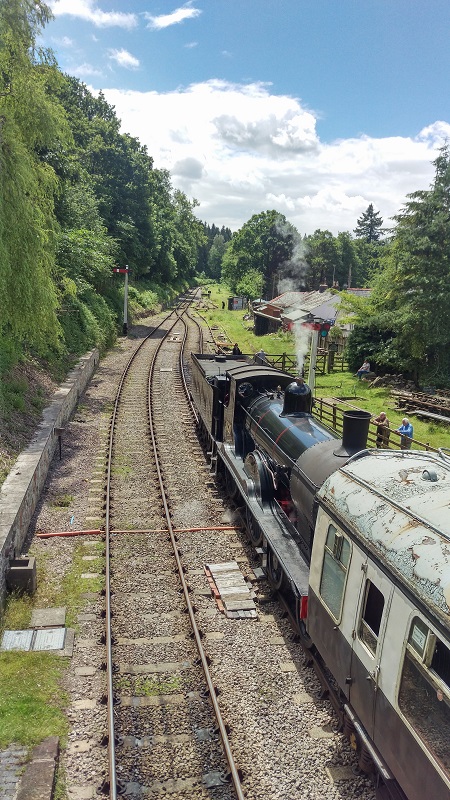 But as this is a Steam Gala there are trains everywhere and 5541 makes an appearance with the inspection saloon.  The saloon is a beautifully restored inspection coach designed for railway officials to inspect the line and that was exactly what was happening today.  A private party from the National Railway Museum where enjoying a trip up the line in luxury. 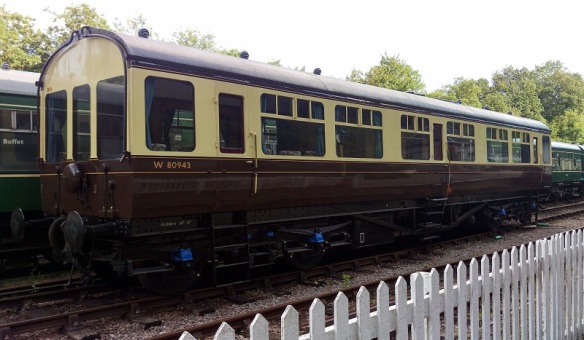 Although Parkend has two platforms it also only has two tracks, which where both full. So 5541 had to pull up behind the Met 1 to let the M9 out, then back out as the Met 1 ran around its train.  And I caught it on film from the platform bridge.

The video does cut short, that’s joy of camera phones, but I assure you 5541 did make it to the platform as you can see below. 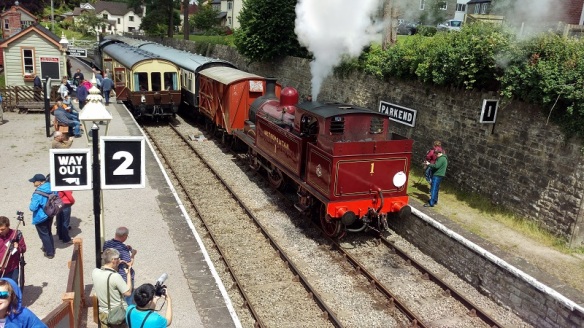 Before returning on my train I took a few more shots. 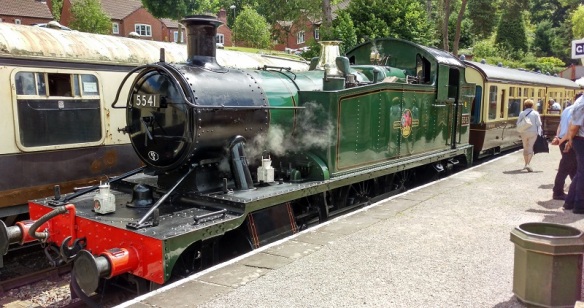 Once back at Norchard I drooped down to the low level platform in time to see T9 running round its train. 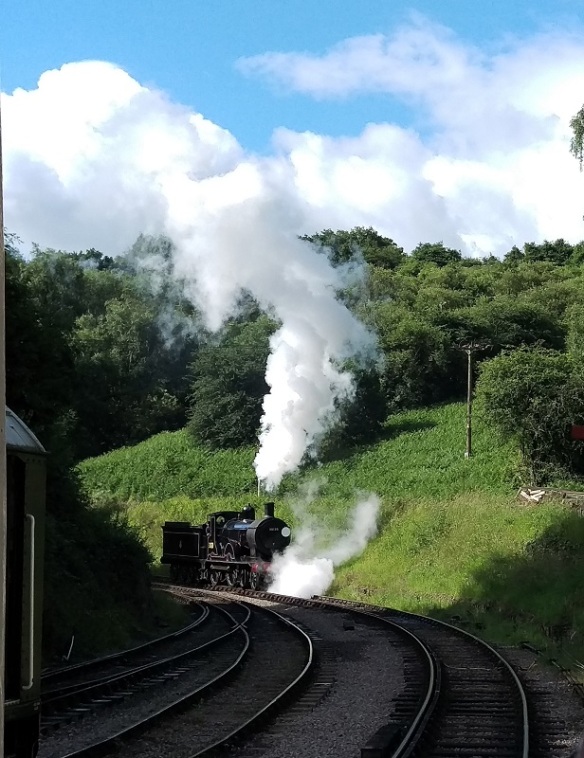 Then I took the T9 to Lydney Junction.

The Met 1 had also carried on to Lydney and both where basking in the sun. 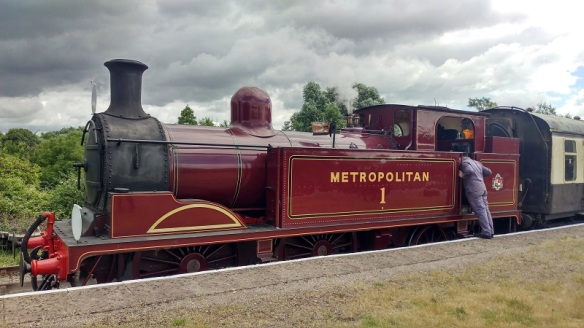 My final video is the T9 pulling out of Lydney Junction with the last train to Parkend for the day.

The DFR/Flour Mill Gala is also on next weekend, the 9th and 10th of July 2016 so if you happen to be in the area; it’s well worth a look.

And that wraps up my visit to the DFR, it was a fantastic day and I am already looking forward to my next trip up. To close I would like to say thanks to all the volunteers who run the railway; because without them it would not be possible and these fantastic locomotives would not be with us today.