This week I’m starting the New Year with some small 3D printed parts to repair a Bachmann N Scale Doodlebug.

The Doodlebug is the name given to a self-propelled railcar originally powered by a gasoline engine with a direct drive or connected to a generator to power traction motors.  They started to operate on small lines around 1907 as they were more economical to run than steam engines.  Typically they ran on their own but could pull another car if needed.  Below is a photo, from Wikipedia, of Santa Fe Doodlebug number M.119 at Isleta, New Mexico in 1943 with its extra car. 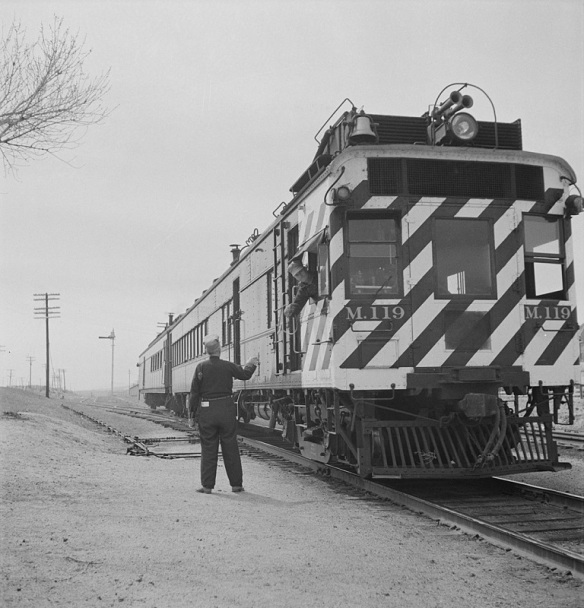 Backmann’s model is very similar to M.119 and is a mixed passenger and mail carrier.  It has a motor near the front which powers the front truck only.  The rear truck is free-running but also picks up current from the rails.

Both of the front axels have gears so they can be powered. The gear is molded into the plastic axel which electrically isolates the two wheels.  It’s impossible to see but the axel that’s been separated from the wheels has split.

This causes two problems; firstly, as the split is between two gear teeth causing a bigger gap, the meshing gear won’t line up correctly and this causes the doodlebug to click or lump as it runs down the track.  Eventually the gears will jam.  The second problem is the wheel will spin in the axel; this results in a loss of traction as the motor won’t drive the wheel.

The axels in the rear truck have also split as you can see below.  I’m unsure why these have split as they’re not under any load, but my theory is simply the pressure applied from the inserted wheel stub forced the axel apart.

The other gears in the truck tower all seem to be in good condition and I think this is because they don’t have anything like the wheel stubs pushed into them, forcing them apart.

To repair the Doodlebug I’ve drawn a replacement gear axel and plain axel which will be 3D printed in Shapeways Fine Detail Plastic material.  I use this material because it’s hard, smooth, and prints to a very high accuracy.  I’ve made the hole through the axels ever so slightly smaller than the axel so it will be a tight fit.  But hopefully not too tight so that it splits the new axel.

In order to keep the cost of the parts to a minimum, two gear axels and two plain axels have been joined on a loop of 3D printed material.  They don’t actually touch the loop so it can be cut off and used without any burs.  That’s a great advantage with 3D printing.

These gears have now been ordered for a test print and once they arrive I’ll fit them and show you how they perform.  If all works okay I’ll make the repair set available in my shop.

I know for a lot of us modelers there’s never enough time for the things we need or want to do, but I hope this year brings for you, as well as me, the opportunity to get some of those long thought out or dream projects done. Here’s to a productive 2020!