In last week’s post I shared with you my design and 3D print of an N Scale EMD DD35 with body mounted couplings.  You can find the post here.  In this week’s post I’m going show how well it worked.

The new EMD DD35 shell, as shown below, is sat on a modified Bachmann DDA40X chassis which has been shortened and had its pilots cut off.

The 3D printed pilots have pockets to receive a Micro-Trains body mount coupling.  This can either be a Type 1015 (Short shank) or a 1016 (Medium shank) and there’s a 3D printed hole in the pilot to receive the mounting screw.

I’ve used the 1016 as the extra length will help with the curves.  Because the coupling rotates slightly off of the screw, the longer arm will mean the coupling can swivel closer to the center of the tracks, which is the ideal location.  The further away the coupling gets from the center the greater the risk of it pulling the train off the tracks.

On our layout ‘Solent Summit’ the tightest radius is in the yards at 16″.  Below you can see the new DD35 coupled up to two originals with the truck mounted couplings.  The three run around the 180° bend with ease and there’s still slack in the couplings.

The middle DD35 has the standard McHenry couplings as supplied by Bachmann.

The McHenry sits a little high compared to the micro trains but the connection is good under tension.  Because the couplings naturally spring straight they will not couple up on the bend, they are way too far out of line, but they don’t seem to be affected once coupled.

Apart from being lots of fun, the idea behind all the motive power, some 23,000 horsepower with the new DD35 in the middle, was to see how the couplings worked with pulling and pushing forces. The train, comprised of a lot of older rolling stock, had a lot of drag which added to the draw bar pull.  The big train made its way around the layout, through s bends and the 16″ radius yard curves, several times with no problems at all.

But as the other DD35s had truck mounted couplings, the GP locos being short and the box cars in the train also being short, all their couplings were close to the center of the track.  To make this a decent test the new DD35 needed to be connected to other long locomotives and freight cars with body mounted couplings.  And luckily there was one on the layout.  The train in the video below, built by my fellow modeller Chris, has two Kato SD80MAC locomotives pulling a long line of Atlas 85′ trash cars.

Both the SD80MACs and the trash cars have body mounted couplings so they will swing out further on the bends.

The trash car has Atlas Acumate couplings which as you can see work well with the Micro Train couplings.  There’s some swing on the Atlas coupling but it’s rotating about the end of the car, not the truck center point. 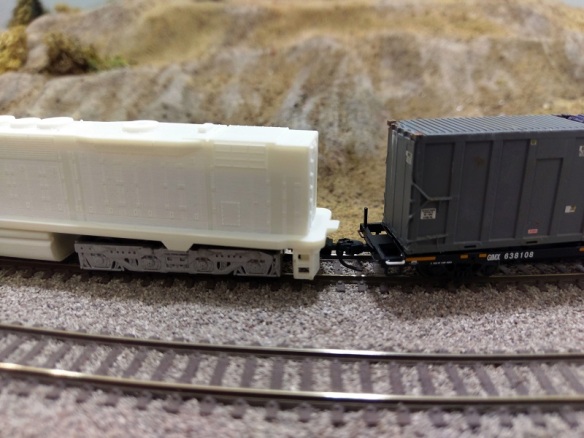 The Kato coupling seemed a little low, or the DD35 body may have lifted and I didn’t notice untill I got home and looked at the photos but it didn’t cause an issue.  The Kato coupling rotates about the end of the loco.

Leaving the East yard the train runs through an s bend, around at tight corner and out onto the layout and the DD35 with its body mounted couplings did this with ease.

It’s possible the shorter 1015 coupling will also work and if the tightest curve is 18″ or 20″ radius then it certainly will.  But I think 16″ is about the smallest radius for the new DD35.

I have a few other things to check and then I’ll make the new DD35 shell kit with pilots and body mounted couplings available to buy.