As promised in an earlier post I’m going to share with you the process of building an N Scale A-B-A Ready-To-Run set of Alco C-855 locomotives.  And this post is the first one covering all the parts.

I released the C-855 kit back in the beginning of 2016 and have made a few since then but as a fellow modeller has asked me to make a complete set for him, two A units and a B, I decided to document the whole thing to help others, as this build is a bit more tricky than normal.

So where to start?

I guess the best place is to show you all the parts you will need.  This will include 3D printed parts, donor parts, new parts and etched parts.

The 3D printed parts, as shown below, are all supplied by Shapeways in their Fine Detail Plastic material; originally called Frosted Detail Plastic.  This material is available in two quality levels; smooth and smoothest. The difference is the layer thickness, Smooth being 29 microns and Smoothest being 16 microns.  The Smoothest option takes longer to print and is therefore more expensive.  Since releasing these models Shapeways have also introduced their option to set the orientation of prints so the best detail can be achieved in the areas where you want it.  However, this also comes at a higher cost and as these engines are so big it did make a considerable difference to the price.  So I offer them in orientated and unorientated versions.  To find out more please see the C-855 page here and the C-855B page here.

The parts 3D printed in Fine Detail Plastic, starting from the top, are:

Since arriving from Shapeways all the parts above have simply been rinsed under warm water, soaked for twenty-four hours in Goo Gone, rinsed again in warm water, left to dry for forty-eight hours and finally run over lightly with a brush in a Dremel style tool as shown below.

I use this tool as any residue left over from the print process turns to powder after contact with the Goo Gone; once dry the brush simply knocks it off.

The next set of parts is the chassis.  For these locomotives, if you want them to be powered, you will need to get a donor chassis from a Con Cor U50 or turbine.  This is the only thing currently available which is even close to the C-855 chassis.  However it is too short and needs to be lengthened.  I will cover that later. 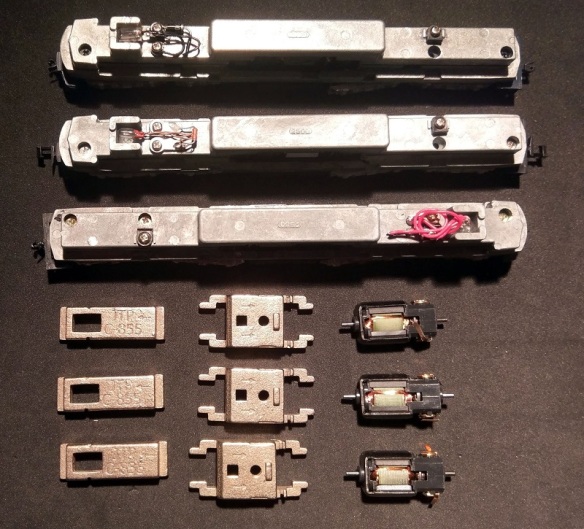 The parts for the chassis, starting from the top, are:

The chassis extenders are also 3D printed by Shapeways and can also be found on the C-855 page here and the C-855B page here.

The new motors are not necessary for the build but the old Con Cor motor, although reliable and strong, is rather noisy by modern standards and this particular Kato motor works well as a replacement.  You can read a post about swapping them here with and an update here.

The last set of parts, well almost, is the etched brass parts as shown below. These are etched in 12 thou brass to give strength to the long parts.

Each etched set of C-855 Additions, as shown below contains:

The etched set of C-855B Additions, as shown below contains:

The only other thing I’ll need for this build is three DCC decoders, LEDs for headlights and relevant wire but I’ll come to that in a later post.  I’ll also start working on the preparation of the parts leading up to the assembling of the locomotives.

This week I’ll finish off by saying I, along with my club members and club layout ‘Solent Summit’, will be at the Great Central Railways model railway exhibition from the 15th to the 17th June 2018.  You can find our more here.  And if you time it right you’ll see an A-B-A set of C-855s running on the layout.