When running your layout on DCC power have you ever had the problem of trains suddenly rocketing off down the track at full speed for no apparent reason?  Well a fellow modeler had just this problem this weekend.  So in this post I will explain what was causing his issue and what you can do to avoid it.

Before I can say why there’s a problem I need to explain a bit about how DCC works.  DCC powered trains all have a decoder inside which receives power and instructions through the track.  This combined supply is a 12V to 16V AC (Alternating Current) signal.  The decoder splits this into two separate parts.  The first part is the AC power which runs through a bridge rectifier.  This converts the AC power into 10V to 12V DC (Direct Current).  The DC is used to power the decoder and any outputs, such the motor and lights.  The second part takes the instructions, which are carried in the AC Bi-polar Square Wave as packets, and feeds them into the decoder processor.

(A Bi-polar Square Wave is not the same as a Sine Wave which you may have seen on an Oscilloscope screen trace; one is a series of square shaped variable width pulses and the other is smooth curved [Sinusoidal] and has a constant period time-base. The DCC signal as well as being square in shape has a variable time-base. By varying the width of each square wave pulse, a digital binary data bit can be transmitted. A binary 1 or a binary 0. It is the pattern of ones & zeros that define the DCC command being sent.).

The instructions will be things like increase speed or turn on light.  The DCC command station sends out many packets every second, that’s why the decoder can do many things at once.

A lot of decoders have the ability to run on traditional DC powered (Analog) layouts as well as DCC.  This is achieved by the processor understanding what type of power it’s receiving.  For example, if a locomotive with a suitable DCC decoder is put on a DC layout there will be no power applied until the DC throttle is turned on.  As the processor starts to receive a DC power supply but no information packets it realizes it’s on a DC controlled layout; this takes barely a second.  So it bypasses all of its complicated circuits and sends any DC power received directly to the motor and lights.  This makes the locomotive behave just like a normal DC locomotive.  It repeats this every time it’s moved on a DC layout.

The next time the locomotive is put on a DCC layout the second it receives an information packet it knows it’s on a DCC supply and returns to normal.

In an ideal world this works well and there should never be an issue, but things can go wrong and the primary cause of locomotives rocketing off down the track is short-circuits.  These are usually caused by derailing trains or when you’re putting rolling stock onto the layout whilst the track power is on.  Especially steam engines with lots of wheels!

So why does a short-circuit cause an issue?  When a DCC command station detects a short it turns the power off.  Some will keep trying to turn it back on or will require you to do it manually.  Situations where you have several quick short circuits, for example putting on a steam locomotive, can cause the command station to repeatedly start up and sending out its packet information as it turns the power back on.  If the decoder in the locomotive doesn’t receive a full packet it ignores it.  If this happens too many times on start-up it may get confused and think it’s receiving no packets of information and switch itself to DC.  The problem now is that it will bypass its processor and feed the full 10V to 12V DC from the bridge rectifier directly into the motor and the locomotive rockets off.

This situation can also happen if a train runs into a point or turnout which is set against it.  The system shorts, you change the point, the trains moves forward and shorts again as some wheels have derailed, you lift the derailed item, it shorts again but re-rails itself, the power comes on and other locomotives on the layout rocket off on a joy ride.

So what can you do to stop this? My advice would be to turn the DC running option off on all of your decoders.  This does mean they simply won’t work on a DC layout so bear that in mind if you run them on both.

So how do you do this?  If you have a computer connected to your layout or programming track it should be fairly easy.  Each brand of software is different but the principle is the same.  I use Decoder Pro from JMRI for my programming and the very first screen when you start programming a decoder looks like this.

Below the locomotive address options is the switch for turning off the DC operation.  In the advance setting or Comprehensive Programmer the option is in the basic tab and there is often a tab dedicated to just Analog Control. 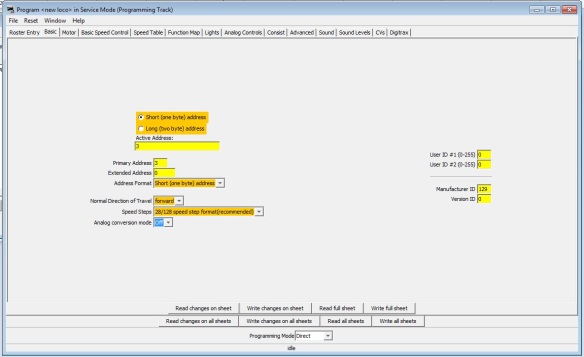 But what if you don’t have a computer connected to your programming track?  The option to turn the DC on and off is contained within the CV (Configuration Variable) settings: CV no 29 controls this.  But it also controls the locomotive direction, the speed step settings, Railcom Settings, Speed Curve Settings, long address option and sometimes more, depending on the decoder.  So to work out what number to set CV29 to there are several calculators available on-line to work it out.  This page on Digitax’s website has several CV calculators and the second one down is for CV29.

If you are programing this CV change on an existing locomotive in your collection, rather than a brand new install, it’s a good idea to read CV29 first and see what the value is.  Then replicate this value in the calculator before making the change.  That way you won’t be changing something you don’t want to.

The 2mm Scale Association also has a good calculator here.

Some of the more expensive decoders are smart enough not to suffer from this but I tend to always turn DC off on them all, just to be safe.  Plus if you intend to install any Stay Alive systems to your locomotives you will need to turn it off anyway as a Stay Alive delivers DC power only and it could confuse the decoder again.

With all your locomotives set this way you should have a rocket free layout!