Over the last few weeks I’ve been working my way through several of the projects which have been on my desk for a while; and as promised I’m sharing them with you.  This week’s project is a replacement set of steps for a Hornby OO Stanier 4MT 2-6-4T as shown below.

The model to be repaired is missing one of its steps from the front, just behind the buffer beam.  The part is a separate plastic piece which is normally glued into the locomotive frame. 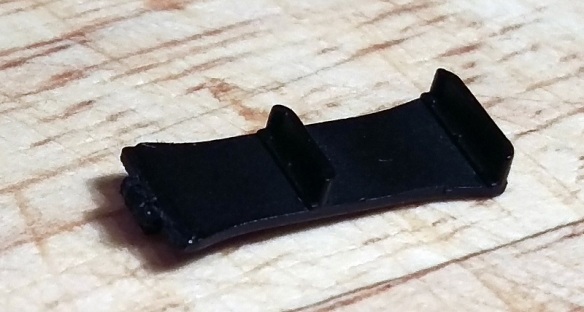 As there was one still on the locomotive I was able to measure it and draw it up in 3D.

This part will be 3D printed in Shapeways Frosted Ultra Detail material because I wanted the steps to be thin, just like the original.  I also included the bolt detail and the locating nub on the top.  The new 3D printed step can then simply be fitted into the existing fixing.

Once I have test printed the part it will be available as a pair through my Shapeways shop.  It will also fit several other Hornby locomotives as well as being usable for scratch building.

Next week I have a replacement part for a German 4-6-2 to share with you.