With 3D printing becoming more and more useful in the model railroad world I have started to look at the scratch built projects I am working on and wonder how I can use 3D printing to do the same job.  This has been great for projects which need complex parts or very bespoke and detailed items.  But sometimes simply making them with a 3D printer can take some of the enjoyment out of model making.  A good example of this is bridges, or to be more precise, timber trestles.  I have always enjoyed scratch building trestles using real wood and in this post I am going to share with you how I have combined 3D printing and real timber to scratch build a new trestle.

The project I am currently working on is a module for the Gosport American Model Railroad Groups N Scale layout.  The module, called Warsash Wye, is five feet long and one foot deep and has a ‘U’ shaped river running through it. Below is a computer model of my module and you can see the river bed at the bottom.

I wanted to create a scene similar to the famous Keddie Wye trestle, which is near the California and Oregon border, but using timber instead of steel.   As with the Keddie Wye the diverging tracks leave the turnout directly onto the trestle high above the river.

There are all sorts of ways to make a timber trestle but the fundamentals are always the same.  There is a main deck or floor that the track is fixed to; it is made from timber sat on a pair of timber stringers which run the length of the trestle.  The stringers are then supported on sets of timber legs called bents.  The bents are spaced at typically 14′ intervals and braced together with horizontal timbers called girts and diagonal timber bracing.

In the computer model below I have placed typical bents in the correct place leaving gaps where the river runs through.  These gaps will have bridge sections built into the trestle. Where the two trestles run together the bents will be twice as wide supporting both parts.

Very little of the trestle is straight, by design, and to accurately space out the bents the set out would normally be fairly complicated.  But with the computer it is a fairly simple operation.  Each line extending off the drawing below represents a change in the radius of the trestle deck.  At the end of each line is the center of the curve.  By using this geometry I can set out all the bents so they are all perpendicular to the stringers in the computer model.

I have made curved trestles before and one of the issues I had was ensuring the bents were all evenly spaced and perpendicular around the curve.  Even though I have set this trestle, out on the computer when it comes to making it there is still a chance of getting the spacing wrong, so to make this trestle easy to build I am going to 3D print the stringers and scratch build all the bents out of timber.  The girts and bracing will also be made from timber

Doing this has several advantages.  Firstly, by 3D printing guides onto the stringers I can ensure all the bents will be set out correctly.  Secondly, curved stringers can be complicated to make and 3D printing them will greatly decrease the construction time and increase accuracy.  Thirdly, as this module will be regularly transported around, having the stringers made from one piece will help protect the trestle by strengthening it, as well as ensuring it holds up to the biggest rolling stock and locomotives we have. 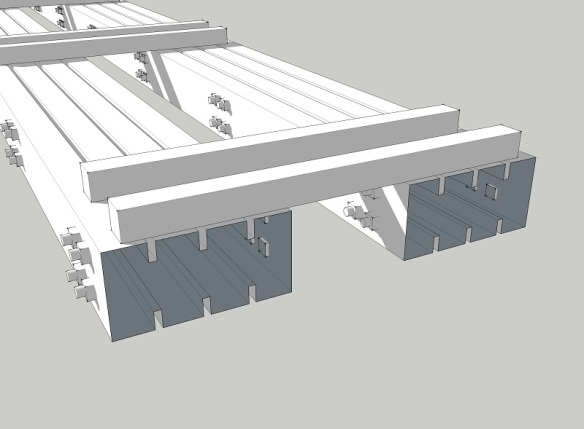 The two stringers are tied together by the guides as shown in the images below, the stringers are shown upside-down.  These have been positioned so the top bent timber, known as the top cap, fits between them.  In the image below there is a triple set of guides.  This is because at this location there will be a double bent as this will be where the trestle crosses the river. 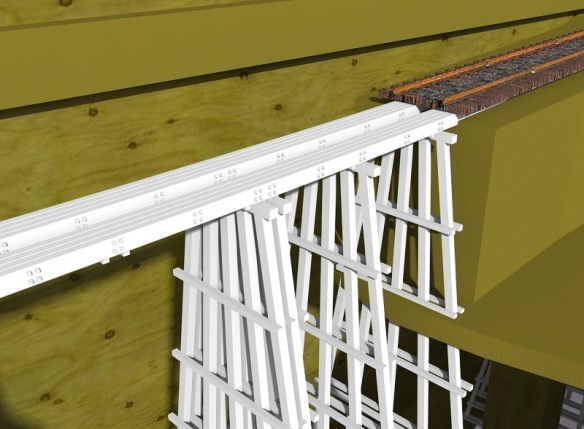 With all the geometry worked out and all the bolt details and notches modeled the parts which will form the trestle deck can be separated out and sent off to be 3D printed.  Because the largest part of the trestle will be very long I have split it in two.  Where the two ends are to be joined together I have designed them so they will finger together for strength.  You can see one of these connections at the bottom right of the image. 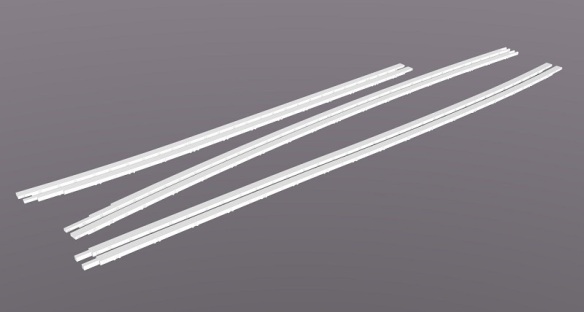 These parts have now been 3D printed in Shapeways’ White Strong & Flexible material.  I chose this material because it will be, as the name suggests, strong.  It is also fairly cheap as it’s Shapeways’ basic material.  The level of detail is not as high as their other materials but for my purpose that is not a problem as the top will be covered with track and I want it to have a weathered wooden look rather than a crisp finish.

These parts have now been delivered and in next week’s post I will show you how they came out and what I did to make them look like timber, blending them into the rest of the trestle.