Earlier this year I designed an N Scale shell for a Baldwin DT-6-6-2000 transfer locomotive.  You can read about it here. This locomotive type was later refined by Baldwin and became the RT-624.  In this post I will tell you a bit about the RT-624 and share with you the design for the new locomotive.

The RT-624 is the natural development to the DT6-6-2000.  Built between 1951 and 1954 the locomotive was still classed as a transfer unit, designed for moving strings of freight cars between local yards in big cities.  It was a heavy locomotive giving it great traction, plus it had, for its time, a lot of horsepower.  Baldwin had started changing their naming convention for locomotives by this stage; this locomotive was sometimes called a DT6-6-2400 but Baldwin’s correct name was RT-624.  RT stands for ‘Road Transfer’, 624 stands for 6 wheels per truck and 2400 horsepower.  To achieve the extra 400 horsepower Baldwin replaced the pair of 606SC supercharged diesel engines with their newer 606A supercharged diesel engines.  These each produced 1200 horsepower and were more reliable.

Baldwin also moved some of the air vents and grill work on the side to help with air flow around the engine compartments. The DT6-6-2000 was almost symmetrical but the RT-624 had one walkway that was a different shape to the rest. This one had a longer raised section allowing for more battery storage under the walkway.

Baldwin made twenty-four of these behemoths; one was purchased by the Minneapolis Northfield & Southern and numbered Twenty Five.  Here is a picture of it taken on the 21st of June 1964 at Glenwood Junction, MN by Marty Bernard (www.rrpicturearchives.net).

You can see it very closely resembles the DT6-6-2000, the headlight is lower and you can see where Baldwin has lowered the grills.

The other twenty-three were purchased by the Pennsylvania Railroad.  The first fourteen, built in 1951 and numbered 8952-8965, ran on the same Commonwealth Trucks as the DT6-6-2000.  Here is a photo of 8963 taken on the 21st November 1966 in Pitcairn, PA by Ryan Kertis.  (www.rrpicturearchives.net).  8963 did not have a lowered headlight but it did have additional grill work on the sides.  You can also see on the right of the photo the walkway runs at the higher level for longer, creating the larger space.  Also apparent in this photo are the antennae on the roof for the uniquely PRR train phone system.

The next eight, built in 1952 and numbered 8724-8731, ran on newer Outside Equalized Trucks.  Here you can see loco number 8728 and an unknown sister engine. The photo was taken on the 17th of July 1965 at Porter, DE by Jeff Van Cleve. (www.rrpicturearchives.net). In the photo you can see the lowered headlight and single lowered grill as well as the newer Outside Equalized Trucks.  Also the end handrails have been revised to include a folding down walkway allowing crew to move between locomotives when double heading.

The last locomotive, number 8113, was built-in 1954 and was the same as the previous eight.

The model I have been working on will be based on the PRR locomotives built in 1952 with the Outside Equalized Trucks.  Because the donor chassis will be the same, an Atlas C-628/C-630, and because the basic shape is the same the majority of the model has already been drawn.

The first job was to move the grills on the ends, in the image below you can see the grills in their new position.

This image also shows the modified walkway on the left hand side with the storage space below as well as the lowered headlight.  The PRR also mounted their number boards in a different place than the Santa Fe on their DT6-6-2000, you can see the oval number board on the side of the main body above the first set of engine doors.  The main body also has some different detail parts on the nose and the roof that have been added as well as shorter exhaust stacks.

The new truck side frames have been draw from scratch although I was able to use the same mid section where the truck clips onto the Atlas chassis truck. 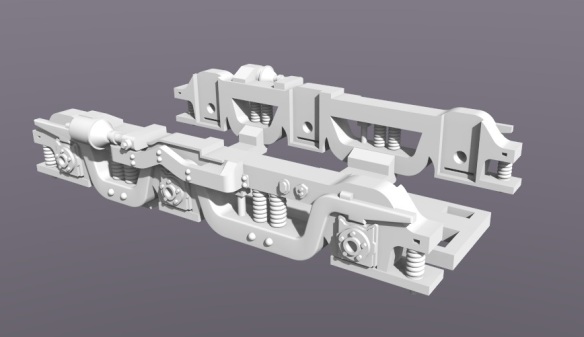 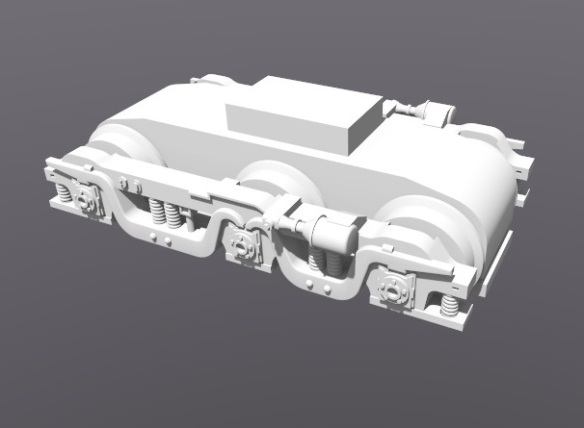 The PRR train phone antennae were a bit more tricky to do.  Given the size they would need to be if 3D printed I felt that they would look way too chunky and very unrealistic. So these have been made as separately applied brass detail parts.  Only the section of antenna which is raised off the roof on posts is an added detail, the cable section that runs down and around the cab windows are molded into the main body as shown below.

The handrails are again printed inside the main body to protect them and will need to be cut out and removed from their sprue before they can be applied.  The new end handrails come with the new link walkway attached.  Below is the view from the inside. 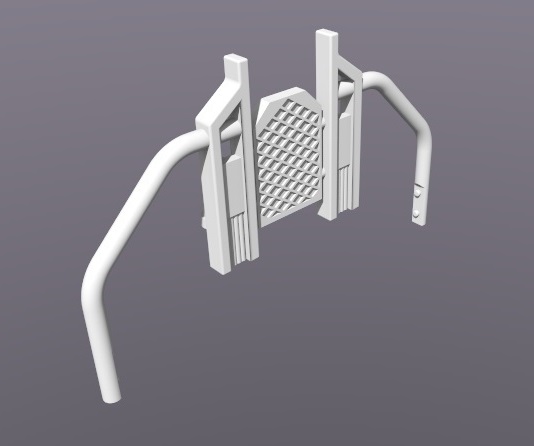 And here is the view from the outside. 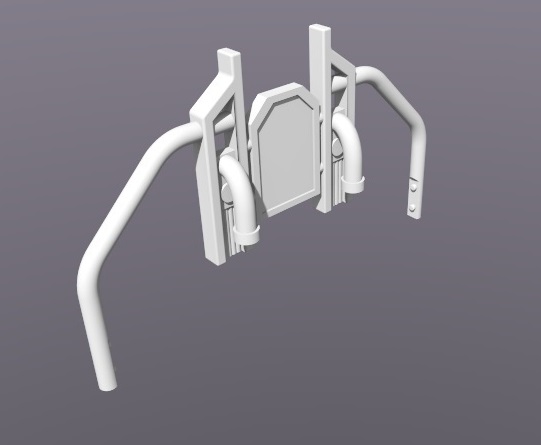 As with my DT6-6-2000 I am also offering a brass Additions kit for this locomotive which will include all the handrails, two roof antennae, two sun visors and four air pipes which can be added as an extra detail next to the coupling.  I have supplied four because I think gluing two together before they are installed will give the desired thickness. 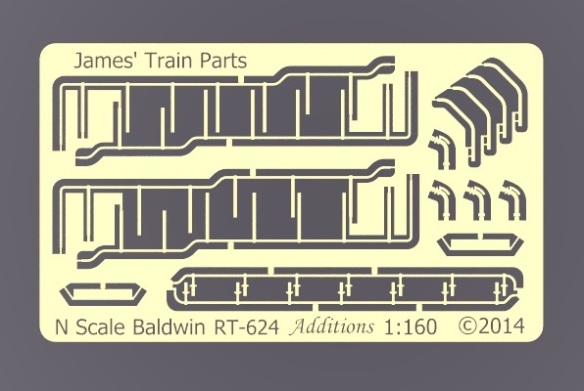 Unlike the DT6-2-2000 the fuel and air tanks are visible on the RT-624.  This is because the RT-624 does not have the large flange plates which hung down on the DT6-2-2000.  This means that the lower section of the Atlas C-628/C-630 chassis will be visible so I have drawn a replacement fuel and air tank section which will clip onto the Atlas chassis using the same fixing points. 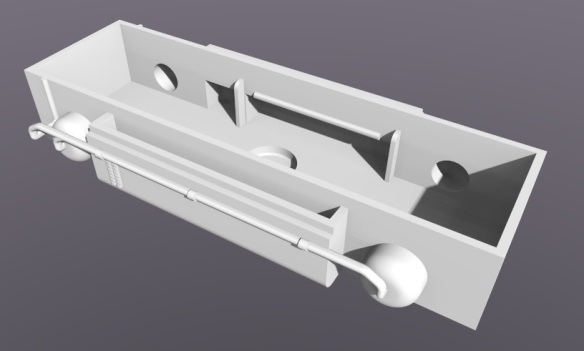 When the locomotive is assembled, it will look like this. 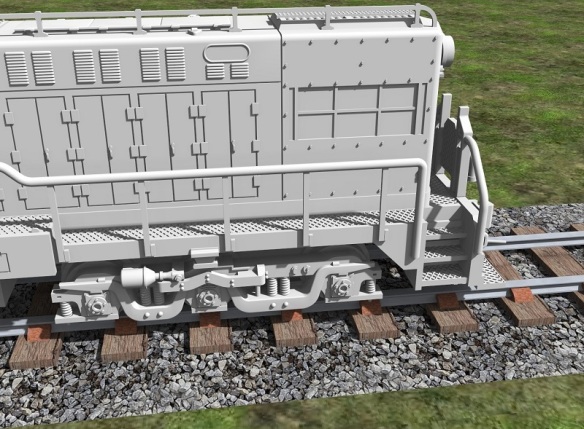 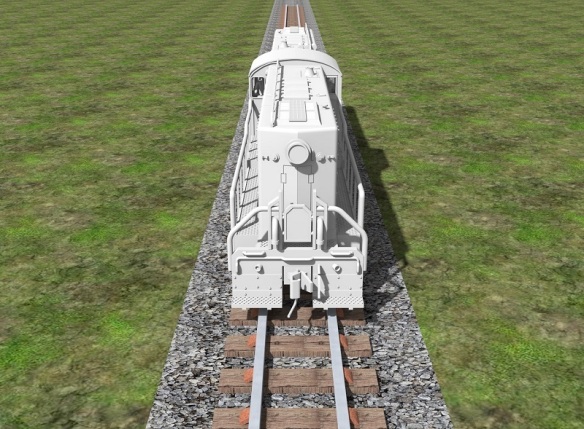 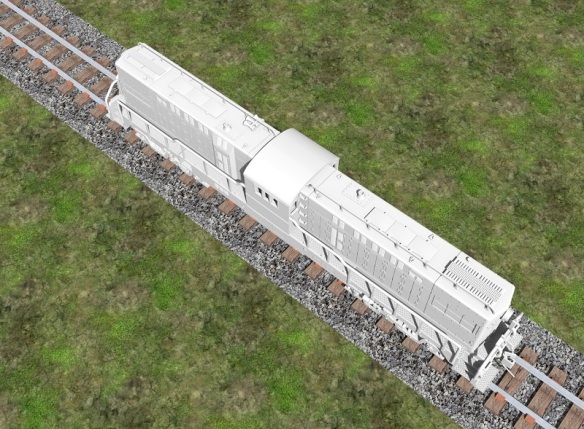 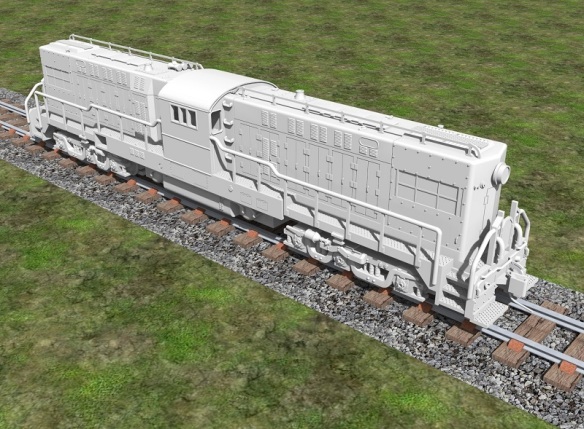 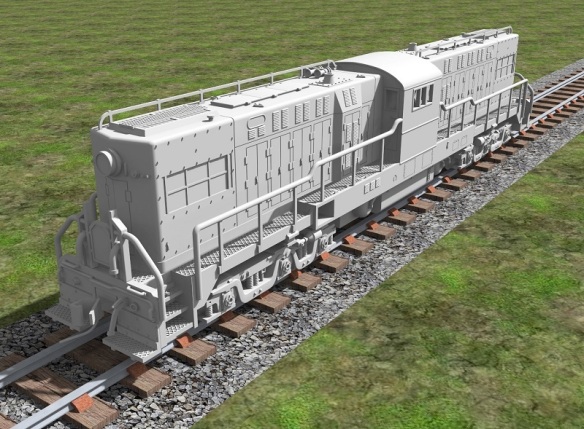 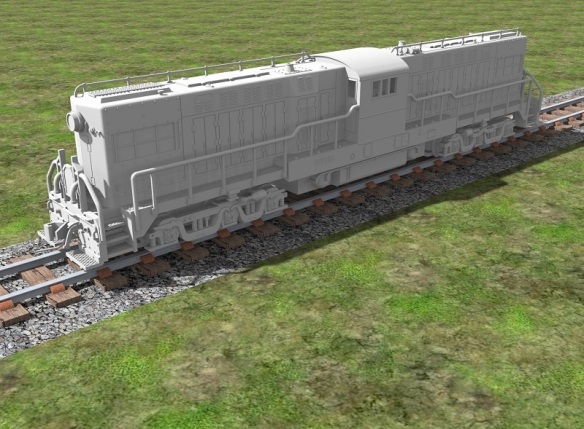 The 3D printed kit will be available from my Shapeways shop printed in the Frosted Ultra Detail material and the brass Additions will be available directly from me, please contact me through the contacts page.

This will also be the first kit that I will be offering in a higher print quality than the Shapeways FUD material.  This will come from a 3D print bureau in London which is offering custom one-off print runs.  The Shapeway FUD material prints at a layer thickness of 29 microns or Ultra High Definition (UHD) which is still far better than just about any other 3D printer currently available.  However it is now possible now to get this kit printed using the same 3D printer but at a 16 micron layer thickness.  This is called Extreme High Definition (XHD).  At the XHD print setting, the layering effect that can sometimes be seen on all 3D prints, is greatly reduced.  Another advantage to using this 3D print bureau is they allow you to specify the orientation of the model; this is important, because if a model is printed upside-down, detail which is resting on the build plate may not be as clear as detail on the top of the print.

However this service does come at a cost.  The XHD model is three times the price of the UHD or FUD from Shapeways.  This is because the print time is greatly increased due to the higher number of layers which need to be printed.  Also because of the orientation, the main body of the locomotive has a large space inside which needs to be filled with support material in order to print the roof of the shell.  At this high level of printing the support material is nearly as expensive as the build material.  Companies like Shapeways can reduce the print cost to the customer by using this space to print other models; if the models are packed densely in the print tray, less support material is used which brings the cost down.

The test print for this model is currently printing at Shapeways in FUD. Once I have received and checked everything fits okay I will make it available in both FUD from Shapeways and XHD direct from me.

In next week’s post I will share with you another new product which will make good use of any spare Atlas C-628 or C-630 shells.