The test print of the Pre-Rebuilt/Ex Gas Turbine UP Water Tender has arrived from Shapeways and in this post I will show you what it looks like and what happens next.  This usually follows the pattern of an inspection, a clean and a touch of color.

Here is how it looks when it arrived, all I have done is taken the parts out of the bags Shapeways ship them in and washed them in a warm soapy water. 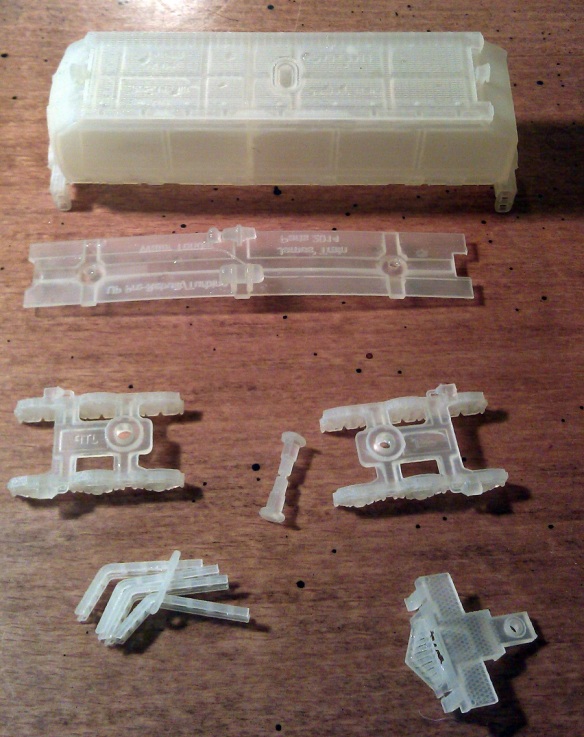 As you can see the parts are almost transparent and very glossy because there is still a lot of waxy residue left on them.  The part at the bottom tight of the photo is a not actually from this kit, it’s a replacement pilot for and N scale Atlas 2-8-2 that I am working on, this I will tell you about in another post.

Overall the details appear to have come out very well as yo can see from the photo below showing pipe work on the end beam.

The small loose small parts also printed well, the trucks and bolster pins are from my other UP Water Tender so I knew they would. The ladders are different in this kit and again I tried too make them as small as I could, the ring is to keep them together until you are ready to start modeling.  They are still over sized but as we are working at 1:160 scale sometimes sacrifices have to be made.

The next step is to put the parts into Goo Gone and leave them for 24 hours.  I use and old pasta sauce screw top jar, this is ideal as I don’t have to completely fill it with Goo Gone and it stays sealed, the Goo Gone evaporators quickly.  I use just enough so that once the parts are in and the jar is laid on it side they are completely covered.

After the 24 hour soak the parts are removed and again washed in warm soapy water.  They are then left to dry for a further 24 hours.  In this time the remaining waxy residue ‘fuzzes up’ and becomes powdery on the surface of the model.  This I remove with an old tooth brush.

Once that is done the model looks like the photos below.

I am now able to see all the detail and it has all printed well.  These shots still show fuzzy build up on the ends that needs to be brushed off.

As it turns out I think I didn’t leave this particular model in the Goo Gone for long enough.  My current jar of Goo Gone has now been used for a lot of models and I think its potency is waning.  Please note, leaving FUD models in Goo Gone, or any other rubber solvent, for too long will make the materiel go soft and start to bend, eventually it will do unrepairable damage.  It is best to stick with the 24 Hour rule, and if that is not enough re-soak for only a few hours at a time until you are happy with the result.

Again for painting I handed the model over to Bob Norris and he went to work.  He started by spraying the whole body with Sea Grey acrylic by Hombrol which also acted as a primer for the yellow as shown below. 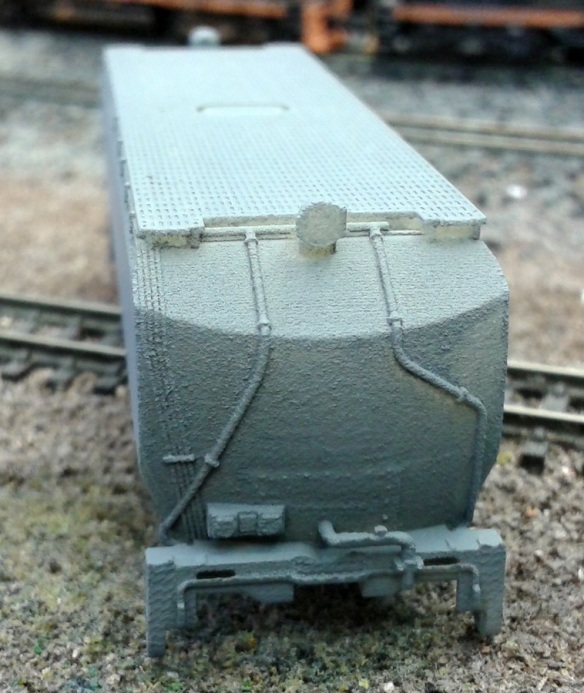 Again, I think the excess fuzziness on the ends is due to me not soaking the model for long enough in the Goo Gone.  However not to be beaten Bob used a pencil eraser on the ends which greatly reduce the fuzzy effect and smoothed out the flat areas. The sides of the body were already smooth right from the print stage.

The part of the print that I was most interested to see was the grill mesh on the top.  You may recall from my last post that this had been modeled in as a recessed detail rather than an actual grill. However with the first coat of paint the grill patten relay shows up well and I am very happy with the result as shown below.

With the gray paint dry Bob added the yellow.  He used Armour Yellow from Badger and brush painted 4 coats as shown below.  The red strips are decals.

For this model Bob used railings from a spare Atlas body shell for the grab rails.

The model still needs a few finishing touches such as a splash of silver in the head light lenses, a coat of matt dulcoat to seal everything in, couplings and weathering but we wanted to show you how we where progressing.

The idea for modeling this tender was for the excursion train but originally it would have been a tender for a UP 8500 Class Gas Turbine.  So rather than show it with a steam locomotive here we have the tender in it’s original job.

The paint color doesn’t match the Gas Turbine, this is because it was painted to match the Kato COLA passenger cars which have a deeper yellow.  When the car is totally finished we will get some more photos and possibly a video of it running with the Kato excursion train, but that will be for another post.