With a lot of DCC installations, particularly on older locomotives, the wires and plugs need to be modified in order to make them fit.  This often creates weak wire joints, especially in areas where the wires can move, so I wanted to find a way to protect these areas.

Recently I have been installing single DCC decoders in multiple locomotive consists; below is a set of Con-Cor Alco PA/PB units.

Both the PA (Cab units) are powered and the PB (Cabless booster) is a dummy.  Inside the PB I have installed a Digitrax sound decoder with the wires running through the corridor connections to the two motors, similar to the Con-Cor EMD E7 DCC installation from my previous post.

I decided to add connectors into the system so I could separate the units if required, which also made it easier to trace any faults such as short circuits whilst testing the units.  Below is an image of the wire harness before it was fitted into the PB unit.  The bit in the middle is a socket for the DCC decoder with a homemade plug fitted into it which joins all the wires together for DC operation and testing.

Although the wires are soldered to the pins, they are still delicate and given the limited number of strands, individually the wires could easily be broken off.  To prevent this from happening, after I had tested the harness I painted the soldered connections and wire ends with a PVA glue. I used a cheap PVA designed for school projects from a local art shop. The PVA went on well and as it went tacky it held in all the pockets between the wires. 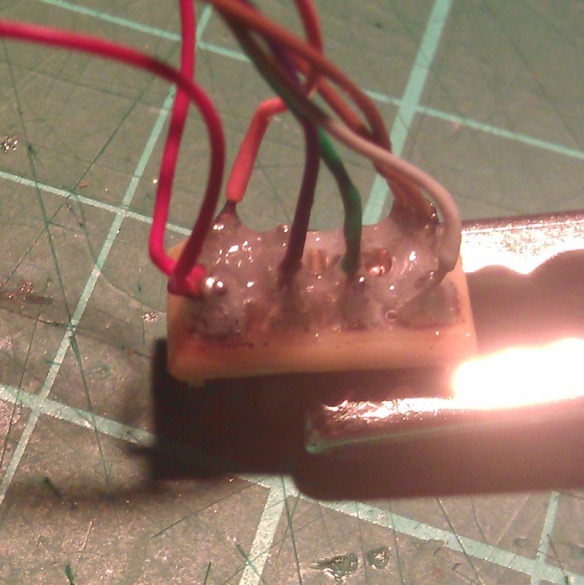 I also added a second coat a few hours later to ensure I had good coverage.  Once dried it went clear and held all the wires in place, plus it gave them a coating to prevent any shorting.  I also did the same thing with the plug ends. 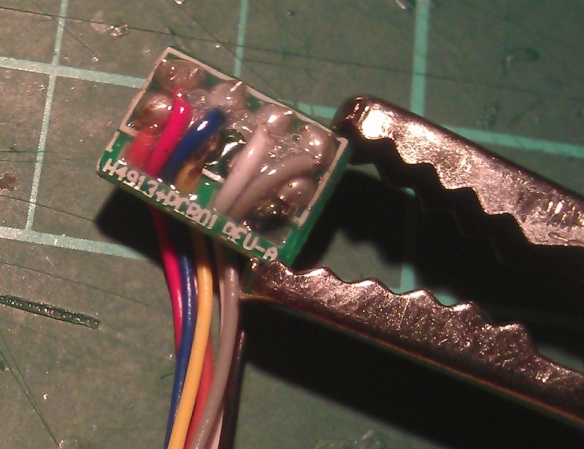 Once everything is assembled the PA units can be separated from the PB unit by simply pulling the plug without risking damage to the soldered wires at their weakest point.

Another advantage of this is a second PB dummy unit (or possibly a powered unit) could be added into the consist as long as it had the same wires and plugs running through it.

Here is as short video of the D&RGW Prospector pulling into Solent Summit station.

Sadly the sound decoder speaker is not as loud as the noise from the older Con-Cor motors which drowned it out, but that is a challenge for another post.